Christian presence in Iraq constitutes one of the oldest continuous traditions in the country. Today, Christians in Iraq are quite unknown, even by Christians in the West. The remnants of this ancient culture and its history are usually lost in the past. Alqosh lies at the foot of the Alqosh Mountain or the Beth ‘Aidhre or Ba’aidhre Mountain.

The name Alqosh (or Elqosh) apparently originates from the combination of the Assyrian Akkadian name, Eil-Kushtu, where ‘Eil’ means God and ‘Kushtu’ means ‘righteousness’ or ‘power’. Therefore, Elqosh, or as casually pronounced Alqosh, means ‘The God of Righteousness’ or ‘The God of Power’. According to another interpretation, the name, Alqosh, could also originate from the Aramaic, Eil Qushti, which means, ‘The God of the Bow’. It is here that it is possible to establish a direct connection with the Assyrian past of this town because in Assyrian symbolism it can be found as a winged disk symbol of God Ashur holding a bow. Its name could also draw its origin from Aramaic where the rainbow was called ‘Qeshta d’Maran’, the ‘Bow of Our Lord’. Alqosh, now Chaldean, is also known as Yimma d’Athor (Mother of Assyria) or Yimma d’Mathwatha (Mother of all Villages). In 2019, the population was around 5,000 from the estimated 6,000 in 2004.

The history of this small town is fascinating, starting with the fact that a city with the same name can be found in Israel, and its links with the Jewish faith and tradition has been recorded since the eighth and ninth centuries BC, when Assyrian and Jewish prisoners found themselves sharing land and places of worship. Alqosh hosts the resting place of the biblical prophet, Nahum, and a monument survived dedicated to the persecution and diaspora suffered by Iraqi Jews after the Second World War, when 121,633 Jews left Iraq between 1948 and 1951. This 800-year-old tomb was incorporated into a synagogue, which since then has been protected by the local Christian community.

Mons. Ghazwan Baho has been the parish priest of the diocese of Alqosh, a village spared by the wrath of ISIS. After ISIS Father Ghazwan participated in the difficult reconstruction efforts of the Christian villages in the Nineveh Plain. Soon, it became clear that rebuilding the infrastructure was not enough to retain the thousands of individuals and families that decides to leave the area. For this reason, the Church “seeks to create job opportunities and act as a bridge between the conflicting parties, a conflict that does not cease despite the reconstruction, but it also had the duty to proclaim the word of God as well as to call the faithful back.” Father Ghazwan’s activity concentrated on “teaching the Bible while preserving the cultural heritage and language of the area. “It did not exist a Bible written in the modern Chaldean Aramaic language; the language spoken by Christ. We decided to translate it during the time ISIS was controlling our area. We realized that nobody thought about translating the Bible from ancient Aramaic into the modern one so to have a sacred book written in this language. The purpose was also to have a common text since in the different villages they speak different Aramaic dialects. The Shai Fund organization supported this project and now we have just received the copies.”

On the wake of the interfaith dialogue promoted by the Pope during his visit to the area in March 2021, a new parish was built: “the new parish of Saint Joseph is a small Iraq where members of different communities, Christians, Yezidis, Muslims, Arabs and Kurds come to listen the word of God.” The parish also hosts a grotto of the Virgin Mary where, as it happened in the past with Nahum’s tomb, “women of different denominations come to pray”.

The history of Alqosh shows that the dramatic history of the area did not spare the village. Besides wars, famines, and plagues, with inevitable demographic fluctuations through the centuries, its population managed to survive and keep alive their faith, remaining a beacon of hope for all Christianity. Alqosh never stopped being the light in opposition to darkness, hope in opposition to desperation, not even when ISIS destroyed all the villages around it.

Father Ghazwan remembers when ISIS was approaching Alqosh “it was always day for us because we could not sleep”. People told him to leave the village because ISIS was looking for religious leaders to kill them. Father Ghazwan’s exile in Dohuk, thirty kilometres away, lasted only one week. On August 15, the day of the Virgin Mary, he was back because “for a week after centuries the bells had not tolled, and no mass was celebrated across the Nineveh plain.” Father Ghawzan remembers that only eighty people were in the church for the service, and that after this people started to return to their homes.

Father Ghazwan, and with him others, believe that it was not by chance that Alqosh was spared the destruction suffered by other Christian villages. During the four years under ISIS’s control, the glowing cross of Alqosh and the sounds of the same bells which the sacristan rings every day, testify to the endurance and resilience of this remarkable town. ISIS fighters could not do anything against it because “we are here to stay, and we will rise again like the phoenix”. There is no pretentiousness or naiveness in his words, only faith in the plans that God had and still has for Alqosh. ISIS has been like a tsunami from whose destruction it is still possible to rise. In 2022, eight years after the ISIS onslaught, Alqosh chants still resonate across the plain.

Father Ghazwan as well as other survivors from ISIS are convinced that they are not the last Christians in Iraq, but that they are here to stay and strongly believe that the catastrophic events unleashed by ISIS are only a minimal part of a story which originates in a distant and sacred past; that the world we live in is not finished but has just begun because, up there, time is measured in billions of centuries. This awareness of belonging to the creation is at the base of the humility and inner peace of Father Ghazwan and his parishioners. It really looks as though this town, founded around 1500 BC, cannot be destroyed, really enjoys some secret pact with God.

This article is based on Maria Rita Corticelli’s book Religious Minorities in Iraq: Co-existence, Faith and Recovery after ISIS, Bloomsbury, London, 2022, and on an interview with Mons. Ghazwan Baho on November, 9, 2022. 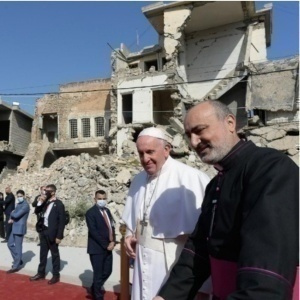