​When memory is helpless

Armin Wegner and the moral failure of the Twentieth Century 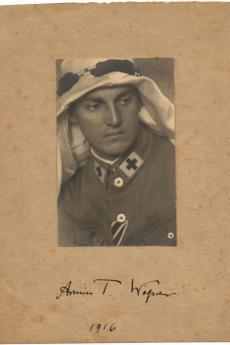 This week I imagined the astonishment that Armin Wegner, whose tale I tell in the book La Lettera a Hitler, would feel at hearing the words of Pope Francis about the Armenian Genocide and all genocide cases in the Twentieth century. The pope not only did not consider as blasphemous to mention the other atrocities alongside the Holocaust, but also dramatically questioned the inability of man to prevent genocide.

Hence it occurs that the memory of past events is unable to shake the international institution’s indifference in the face of new mass crimes. This memory in fact does become completely helpless, because the humanity is unable to learn from mistakes. Nowadays, everybody – except for Erdogan in Turkey - is able to play fair in the face of the past, but then in front of the present challenges the majority of people remain deaf and dumb.

What seems to prevail in the face of the repetition of evil in history is always indifference.

Armin Wegner was the witness par excellence of this moral failure that characterized the whole Twentieth century. As he served as a medical officer, he noticed the indifference of the German army in the face of the massacres against the Armenians that were being carried out a few metres away from the officers’ camps. The only thing German soldiers worried about was not catching typhus, which followed the carriages of the hundreds thousands Armenians marching towards Nothing.

And when Armin Wegner went back to Germany, and after the fall of emperor Wilhelm II he started touring cities to show the pictures of genocide he had secretly shot, he soon realized that his conferences had no effect in the German cultural circles. Not only he was not allowed to say that Germany had been allied to a regime that perpetrated terrible massacres, but those pictures would also play no role to prevent the rise of Nazism.

Armin had felt ashamed as a German in the front of the Armenian priest Arslan Dadschad, who had told him about the ordeal of his people in the desert, stating in disillusionament: “I know I am death bound, once I was a priest and now I am nothing but a mutton heading for his death.”

No one though felt ashamed in Germany for the persecution of Jews and rhe start of the anti-Semitic campaign in 1933. The people in the street in Berlin applauded the boycott of the Jewish shops and considered the hate against the Jews as a moral value serving the national cause.

This is why Wegner decided to write his personal protest letter to Hitler, in which he tried to explain him that the persecution of the Jews would turn into a terrible shame for Germany’s future.

The Führer, instead, thought that the Armenian genocide had been forgotten in the general indifference, and that the same would happen regarding the Jews. From a certain point of view, Hitler had been consistent with his own opinion that the past was no use, but instead showed that executioners may enjoy impunity.

Armin was also astonished because after First World War he had imagined that states and political entities would be born, that would put an end to violence and indifference, and instead he saw that the communist parties and the Soviet Union preached the legitimacy of a “good violence”.

It did not appear as possible to him that those who elevated themselves to the rank of representatives of the war and exploitation victims reproposed a world where violence and hatred were a moral value to pursue. In his journey to Russia he realised that revolutionary thought it was particularly deserving to repress pity and love towards the other. Those who surendered to private feelings in the face of the great plan of revolution was considered as a petit-bourgeois and a cowards. For the definitive victory of Good it was necessary to be ready for anything.

Why did everything repeat in history, as the Qohelet said, asked himself Armin Wegner?

This was the queston he could not answer. He wrote it in front of the entrance of the Windmill that he had bought in the Island of Stromboli:: “Why cannot people accomplish the tasks they had set for themselves?”

The Pope probably reproposed the same question by remembering the Armenian genocide and giving it a clear and precise name.

People face their own failures as human when they are not able to stop massacres, as it happens today for the massacres of the Christians, Jews and Muslims who fail to conform to murderous fundamentalism.

Gabriele Nissim, chairman of Gariwo, the forest of the Righteous