The Armenian Righteous in the Milan Garden 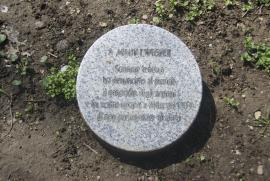 The memorial stone in honor of Armin T. Wegner at Milan Garden of the Righteous (Gariwo)

During the genocide against the Armenian people (1915 – 1923) perpetrated by the government of the "Young Turks", in which over 1.5 million people died, there were also steady supporters of Good who decided not to turn away and risked their lives to oppose genocide.

At the Garden of the Righteous in Milan, over the years, many figures have been honored by planting trees and unveiling memorial stones.

Folllowing are the inscriptions on the stones:

To Pietro Kuciukian
In honor of the Righteous for the Armenians in Dzidzernagapert, Yerevan

To Giacomo Gorrini
Italian consul in Trabzond in 1915,
witness to the Armenian genocide, which he reported
to the international community while it was ongoing

To Armin T. Wegner
German writer, he denounced to the world the genocide
against the Armenians and he wrote in vain to Hitler in 1933
not to persecute the Jews

To Ayse Nur Zarakoglu
Turkish publisher, she devoted her life to the defense of
civil rights, truth and memory in her own country

To Fridtjof Nansen
Norwegian explorer and Peace Nobel laureate
in 1922, he created a "passport" for the stateless
and rescued the Armenians and refugees

To Beatrice Rohner
Swiss educator, she risked her life to rescue
in Turkey the Armenians orphans who had survived genocide
in 1915-16

An Ottoman Turk, Mayor of Aleppo, he opposed
the directives of his government that imposed the elimination
of the Armenian people in the genocide of 1915