Neve Shalom to honour the Turks who rescued the Armenians 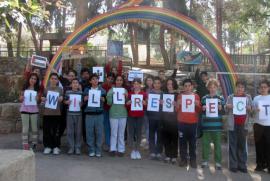 On 2 November Yair Auron, historian, professor at the Open University and founder of Gariwo-Israel, will inaugurate the international conference Genocide: History and Memory dedicated in particular to the memory of the Armenian Genocide of 1915. The conference, with the participation of scholars from all over the world, will be followed on 4 November by a meeting with Israeli President Reuven Rivlin and honoring the Righteous at the museum of Neve Shalom-Wahat el Salam (Oasis of peace in Hebrew and Arabic), a cooperative village born from Israeli and Palestinian families who had relatives who were saved by people of the enemy nation during the most gruesome stages of the Mid-Eastern conflict and wish to overcome hostilities, building a possible peace between the two peoples from the bottom. The ceremony will be dedicated to the Turks who rescued Armenians during the Metz Yeghern, the “Great Evil” in which, hundred years ago, a million and a half Armenians perished. We interviewed Dyana Shaloufi-Rizek, director of the Museum of Neve Shalom-Wahat el Salam - the place that hosts this project, where the testimony of this “thumbnail peace process” is kept.

You have just been to Nazareth to see your family. How is the current situation there and perceived in the Territories?

Palestinians are afraid but they are not losing hope. There are radical movements in both sides, but generally people want a solution. The leaders of both sides do not know how to do the job, we in Neve Shalom – Wahat el Salam believe it depends also on people, not only on leaders. People have the power to reach the end of this conflict.

How is it perceived in Neve Shalom?

When the conflict sharpens, we tend to seek more occasions to stay together, share our emotions and ideas even if we do not agree on everything, we believe we must go on because we cannot stay in this situation forever. We, at Wahat al Salam can also set an example for the people living on this peace of land that belongs to the Palestinians and Jews as well.

How does the construction of the Garden of the Righteous of Neve Shalom proceed?

It is especially a task of the Open University prof. Auron is working on it. We are going to commemorate the centenary of the Armenian “Holocaust”. We wish to emphasize that Turks helped the Armenians during their tragedy, and then we wish to emphasize that Armenians helped Jews during their own Holocaust.. Not all Turks went out to kill the Armenians. A war was going on. Generally, in this situation, people shut their mouth or tried to look away, but many Turks helped Armenians and we would like to learn more and more names and memorialize and honour them.

Are people interested in these topics? Maybe because once the whole land there was under the Ottoman Empire?

There are not many people interested in the Armenian Genocide in Israel and Palestine. The Israeli Jews in general – I am generalizing – deal more with the Jewish Holocaust, and the Palestinians are worried about their own ongoing tragedy. The fact that they do not have their state, yet, makes them believe that it is not the right time to deal with the other’s situation.

Some people understand that we can learn from those experiences although only a few people rescued others during massacres, ethnic cleansing and genocide. We are part of a conflict which so far has gone on for 100 years. Thus I hope we can open our hearts and minds and look around and start learning from the others’ experiences. We cannot go on discussing whether we are the victims or the Jews are? Come on! We must become less victimistic, if we want the situation to change for the better, we go on even if we are supported by few people only. We think over the years the interest will grow.

How would you describe the situation of Palestinians today?

Palestinians in general are need to live as humans. They want war to stop, they do not want to be blamed for everything, for terrorism and so on. They would like to be viewed as people who cannot go anywhere else, because this is our homeland.

Do you think the “intifada of knives” is due to the rage for the occupation?

I think there are many reasons. One reason is the rage for the ongoing occupation and all what it means. And the other thing is that we can't see any solution. For Palestinians it is difficult to accept the idea of Jewishness of the Israeli state. They ask questions such as: What about us the palestenians? This is our homeland so, Where you want us to go? How will you treat us? This kind of questions. We want to live in good conditiions, without the destruction of houses, without the treathen of soldiers or violence of the settlers, without the very high unemployment rate that affects all.

Slowly, the Israeli government is doing a policy of taking possession of the Al Aksa Mosque/ Temple Mount in Jerusalem. There are also racists and extremist settlers who go there not to pray, but to provoke. I am Palestinian but not Muslim. More and more Jews start to see that, too.

What do you think of the deal that has been just reached between Jordan and Israel about the Temple Mount? And what can the future be like for the Israelis and the Palestinians?

I do not know what is going to happen in the future with these “small and temporary solutions”. Europeans and Americans are involved and the whale world isk too. They all wants “great solutions”! But they do not want to understand that the solution that is needed here must be concrete and be suitable for both peoples – if peace is good only for one side it is not a reall peace.

Sooner or later we are going to find ourselves in the same situation or even a worse one. Now we are afraid of each others. More and more people are afraid.

Who are the brave people who are going to put an end to all this? I do not know.

We must learn from Righteous that we are all human beings, we all have the same feelings, what we want for ourselves is what we also would have to want for the others. We should be more humane and not only defend our side.

We were born equals. We all need to take responsibility and take actions that are good for all.