nine years after his death an investigation is still ongoing 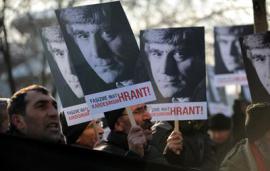 The march in Istanbul to commemorate Hrant Dink (https://cpj.org/hrantdinkafp.jpg)

Thousands gathered in Istanbul on January 19 to commemorate Hrant Dink, the Turkish-Armenian journalist murdered nine years ago outside his newspaper Agos’ offices. Dink was an advocate for reconciliation between Turks and Armenians and contributed to this effort through Agos, published in both languages. The march was attended also by Selahattin Demirtas, co-chairman of the pro-Kurdish Peoples Democratic Party (HDP), the deputies Türkan Elçi and Nazenin Elçi, respectively the wife and the daughter of human rights attorney Tahir Elçi murdered on November 28, 2015 in Diyarbakir, and Sami Elvan, the father of Berkin Elvan, who had been killed in the Gezi Park Resistance. The protesters chanted "We are all Tahir, we are all Kurds", "We are all Hrant, we are all Tahir", "Long live the brotherhood of people", "Who protects the killers, is party to the crime”.

Dink was hated by Turkish nationalists because he had recognized as "genocide" the mass killings and deportations of Armenians in Turkey in 1915 and subsequent years during the First World War. His murder, Ogün Samast, who was then 17 years old, was sentenced to 22 years and 10 months in 2011, while Yasin Hayal, a former member of a far-right political party and a right-wing nationalist youth group who in 2004 had exploded a bomb against a McDonald's restaurant in Trabzon, was found guilty of inciting Samast to kill Dink and was sentenced to life imprisonment.

A separate investigation against 26 public officials accused of negligence at the time of the murder has been launched only recently. Relatives and supporters of Dink believe that government officials, police, military staff and members of Turkey’s National Intelligence Agency (MIT) have a responsibility in the murder of Dink for not protecting him.

The government now seems to admit that the search for all the persons involved in Dink’s murder has suffered delays and accuses the so-called "parallel state" for this, according to the statements given by Science, Industry and Technology Minister Fikri Işık responding to questions in Parliament on the anniversary of the journalist’s death. "We accept that there has been a delay due to the attempts of the 'Parallel State Structure' to shadow the probe," the minister said, quoted by Hurriyet Daily News. The ‘Parallel State’ is the parallel structure infiltrated in many state bodies which, according to the government, is led by US-based Islamic cleric Fethullah Gülen, former ally of President Recep Tayyip Erdogan and the AKP, and now accused by Erdogan of being the head of a terrorist organization. The officials under investigation are suspected of links to this movement. "But nothing can remain secret. If we had thought different, we would not make so many efforts to investigate all the details of this case and we would not give a full support to the judiciary. Now we want and hope that all the institutions concerned will work effectively in making light on this matter and on other unsolved murders”, the minister added, according to HDN.

On December 9 the Istanbul Chief Prosecutor’s Office accepted the request of indictment for 26 police officers (some still in service) for "negligence on public duty" in connection with Dink’s murder. The officials, who were on duty at the time of Dink’s killing, are suspected of having ties to Gülen and were accused of "having formed or headed an armed terrorist group", "belonging to an armed terrorist group", "power abuse", "manipulation, destruction and or concealment of official documents", "manufacture of official documents by public servants "and "deliberate murder on negligence". All were on duty at the time of Dink’s death.

“A relatively serious inquiry started in 2014, taking into account the European Court of Human Rights’ ruling”, Hakan Bakircioglu, Dink’s lawyer, told euronews. “In this context, we have made progress. But it all comes very late. We reached that point after nine years… Still, the latest indictments are important,” he said.