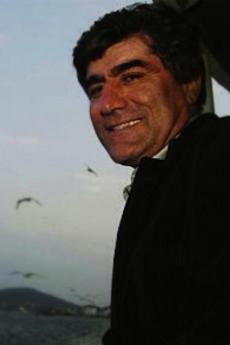 In April 2013, on my last day in Istanbul, I held a performance from my book Die Richter des Jüngsten Gerichts (The judges of the most recent court), in four languages: Armenian, German, Kurdish and Turkish. The Armenian texts were read by Ani Balikci, Sevag Balikci's mother.

A murder on the anniversary

25-year old Sevag Şahin Balıkçı was shot by a comrade while he was on military duty. Not any day, but on 24 April, the day on which we commemorate the Armenian genocide of 1915.

He would have been murdered by mistake, the commanders told his relatives.

Ani Balıkçı told me the story of their family. Her father Mardion was born in Sivas, her mother Sona in Istanbul. Ani married her husband Garabet Balikci in 1978 and their daughter Lerna was born in 1980. Their son Sevag was born on 1 April 1989. He had a bent for handcraft, and wanted to specialize in ceramics production, attending also artistic and professional courses. He performed his military duty in a police station in a mountain area at the Eastern borders of Turkey. 17 days before being discharged, he was killed by Kivanc Agaoglu, a notorious ultranationalist and rightwing extremist whose comments can still be read on a Website.

Ani Balıkçı said: “They sent us back our son with two holes in his chest. In a wooden coffin”. She was asked whether the coffin would have to be wrapped in the Turkish flag. “Why not, she said, if the Armenians are always considered as 'infidels' in this country, even though they are its most ancient inhabitants. Why not, she answered, "if the Armenian survivors though must live under this flag? Why should my son with the holes in his chest not be wrapped in this flag?”.

After her son's murder, her life became a nightmare. Her boundless grief hurt her immensely. Nonetheless, she wanted to keep strong and fight.

This is why she struggled together with Rahel Dink, the widow to Armenian journalist Hrant Dink murdered in 2007 by a young ultranationalist on the street in Istanbul, whose struggle against injustice and democracy has already entered history.

“Does the Armenian question not exist anymore?“

Hrant Dink was still alive when we, members of a guilty people, held for the first time in Colonia, in 1999, a series of  events about the genocide against the Armenians. The first event was entitled as „Does the Armenian question not exist anymore?". The quote comes from the speeches of one of the main culprits of genocide, Talaat Pasha, who had uttered that sentence without the question mark. Amidst the Eighties, intellectual Ralph Giordano, who died little time ago, had shot a documentary film on the annihilation of the Armenians, which had the same title. Since Turkish forces threatened the WDR network, this channel that was state-funded for a half could broadcast the documentary only once. Ten years later, I had been in Germany for a short time and I knew very little about Ralph Giordano, except for the fact that he was an uncompromising antiracist. Once I heard of a meeting planned in Colonia, under the title "Cultures in their multiple features". The meeting was organized by the Turkish-German Cultural Forum. Guests were some human rights activists from Turkey, where at that moment an Islamist and an antisemite were on power, people like Necmettin Erbakan who died a couple of years ago. Besides the Turkish intellectuals, who left me a strong impression, because they had taken honestly and bravely sides for human rights and democracy in Turkey, another guest was Ralph Giordano. After all guests had exposed the current problems of Turkey, he spoke, too. He said that he wanted to ask the question: "Even though you take sides so bravely and with such resolve for human rights and democracy in Turkey, why are you silent on the Armenian genocide? “

In a moment, silence reigned over the meeting hall, and went on for entire minutes. When the discussion was resumed, the feeling remained that Ralph Giordano had really managed to destroy the harmony existing between the well meaning parties present.

For the first time I felt that we, the members of Turkish society, had interiorized genocide denial without even questioning it.

At the time I was sure, and I still am, that everybody in the room knew about the so called "tragic events". Everyone of us knew at least a story about the cruelties carried out against the Armenians, had learnt about them as a child already, or as a young man, or even later as an adult. But regardless if they were leftist radicals, nationalists or pious Muslims, at the time there was a sort of a tacit agreement: one would ignore, be silent, or tell lies as soon as anybody tried to discuss the annihilation of the Armenians in 1915-16.

The series of meetings “Genocide and Memory” were organized in 1999 by Turkish, Curd and German associations; other initiatives were held in the Alte Feuerwache civic centre in Cologne. The director of the Institute for Diaspora and Genocide Studies of the Bochum University was the first lecturer. According to him, in 1915-1916 the Young Turks “solved the Armenian matter” through annihilation. Now the Turkish matter was left unsolved: how could Turkey deal with its history of guilt?

Then, I did not know how could I face the question, myself.

Turkish lectures on the subject gave off little sparks. Until the end of the ‘90s, nothing was published in Turkey on this argument - nothing on the nude-true historical facts. Belge-Verlag, that later on became my own publisher, then started to publish the first books on genocide against Armenians. It started with Yves Ternon, “Tabu Armenien”, immediately banned; nevertheless, it was continuously passed from one to another, read by many people. A year later, Taner Akcam - at the time living in Germany - published a book titled “Armenien und der Völkermord: Die Istanbuler Prozesse und die türkische Nationalbewegung” (Armenia and genocide, the Istanbul trials and the Turkish nationalist movement, Hamburger Edition, 1996).

The reading of these books was one thing. Another thing was to ask myself how could it be possible to reach such violence and, for sure, also how to criticize it. That is the reason why the confrontation with Shoah offered us many intellectual and didactic materials: if we couldn’t have made reference on these experiences, it would have been much harder for our civil society to face the Armenian genocide.

Right-wing nationalists and ultra-nationalists wanted to sabotage this confrontation, for example by trying to impede the access to these meetings. At the same time, in Turkey the number of books on genocide, against the Armenians, kept increasing; a part from Hrant Dink and a couple of other intellectuals, silence kept reigning.

The upheaval for justice, democracy and human rights

After Hrant Dink’s murder in 2007, hundreds people protested during spontaneous riots in Istanbul and Ankara. Hundred thousands marched with posters with the writing “We all are Hrant. We all are Armenians” on; they held the coffin in a funeral procession 8-kilometers-long. From that moment on, the Turkish state and the nationalists could not prevent the civil society confrontation with the memory of genocide in many places. Non-violent mass protests and the civil society rise ensured the Hrant Dink’s attackers’ aims not to meet, in any way, society approval.

In 2012 the so-called Gezipark movement started. I followed and observed Istanbul protests, which thrilled me too. After my four-months imprisonment in 2010, I stayed a moth in Turkey, where I found civil society groups and I was able to speak with many young people. At the time, I already felt those riots as something that have always been part of me, more than a-political protests.

The young people was anti-dogmatic and curious - I think that the new generations know so much. They know much, because they understand many things. For example, they understand that, during World War First, Young Turks annihilated the Armenians and, later one, they also deported the Greeks. They understand that, in 1938, near Dersim, so many Alawis and Curds were slaughtered. They understand that, after the 1980 military putsch, half a million people were arrested, many of them were tortured and some are still missing. The arrested, tortured, missing and executed ones are their parents, uncles, aunts, grandparents. State institutions shrouded these facts in silence, for many years, while the Country itself was silent; but now, the current generation wants to escape from this silence.

In the green Gezi Park there once was an Armenian cemetery. In 1919, after the Istanbul trial against the Young Turks authors of the genocide, a monument was erected in the Armenian victims’ honor.

The Istanbul trial was the first trial focused on the theme “crime against humanity”. The trial celebrated in Constantinople was a sort of Nurembergtrial. On July 15, 1919, Talaat, Enver, Cemal and Nazim were sentenced to death in absentia. 17 death sentences were pronounced together by military courts; three of them were accomplished immediately. Some executioners, like Talaat, that Germany helped to expatriate - mostly by going to Berlin -, after a while were killed by pistols-shots by Armenian executioners. On December 6, 1921, the ex-grand vizier Said Halim was murdered in Rome; on July 21, Cemal Pascià was killed in Tblisi. During April 1922, the secret services head “Teschkilat-ı Mahsusa”, Bahaddin Şakir, and the chief of police “Trebisonda hangman”, Cemal Azmi, were killed the same day and at the same hour in Uhlandstraße in Berlin. Their graves are in the Turkish cemetery of Neukölln in Berlin still, nearside the Neukölln mosque entrance. Talaat’s remains were seen by two law officers during their visit of the Sachsenhausen lager on February 20, 1943, when they put them on a high-speed train for Istanbul. Five days after, Talaat was placed in a State mausoleum in the honorary cemetery “Monument of Freedom” (Abide-i Hürriyet), on the “Hill of Eternal Freedom” (in Turkish: Hürriyet-i Ebediyye Tepesi) in the Istanbul district - a place that, at the beginning of the Twentieth Century, was mainly inhabited by Christians (Armenian and Greeks), as well as Jews, who shaped its characteristics.

In the Gezi Park area ancient and current stories of state violence merge together. This is the reason why Gezi demonstrators dedicated a street that crosses the park to Hrant Dink.