Ten years after his passing away 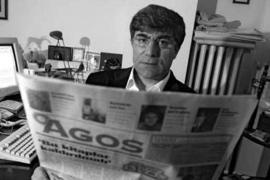 Hrant Dink in the editorial office of weekly magazine Agos, founded by him

Ten years ago, Hrant Dink, the Turkish journalist of Armenian descent who had committed personally to favouring reconciliation and dialogue between the Turks and the Armenians and the opening of Turkish society to democracy and pluralism, was murdered in Istanbul. With a great deal of courage Dink had made a clear stand on the “Armenian issue”, calling as "genocide" the 1915 massacres and deportations of the Armenians in the Ottoman Empire, and yet he was against the pressure campaigns from aborad to compel Turkey to recognize the crime, as he deemed them to be counterproductive. He fought nationalism both on the Turkish and on the Armenian side and wanted people to cross their preordered schemes and prejudices to learn to act following their conscience.

His ideas had entered Turkey's process of democratization and increasing freedom that had started in the past decade, that had a harsh stop with the authoritarian turn imposed over the recent year by President Recep Tayyip Erdoğan and the crackdown that has followed the failed coup of past July. But his heritage is nonetheless still alive and was recalled during the ceremonies in his honour held in his homeland and abroad on this anniversary.

Among the most touching initiatives, I shall mention the one organized in Istanbul by the “Friends of Hrant Dink's”, a group of activists who have followed for many months the ongoing trial against the police and security officers accused of not protecting the journalist, who had received repeated death threats, and overtly demonstrate to demand justice and the truth. The place chosen for this commemoration, which saw the remarks by Rakel Dink, was the street in front of the old seat of weekly magazine Agos, where Dink was murdered by a young ultra-nationalist on 19 January 2017. Precisely through this newspaper, published both in Turkish and in Armenian, that Dink had founded in 1996 and which he would run until the very day of his death, the Armenian community of Istanbul had found a means to get out of isolation, let itself be known and take part in the city's and national social and cultural life. This was a task that Agos keeps on carrying out, voicing the demands for democratization and protection of human and minority rights all over Turkey.

In Ankara, instead, police intervened to interrupt the commemoration held in Yuksel square with the participation of some deputies of two opposition parties, the Peoples' Democratic Party (HDP) and the Republican Party (CHP). In the capital, taking to the street has been forbidden since 10 January for a month, and the people organizing the demonstrations were allowed only to observe one minute silence. Participants have remained together and police attacked them to disperse them, reported Agos.

Outside Turkey, commemorations have been held in Germany, France, Great Britain and Canada, while in Italy the Turkish-Armenian journalist was remembered during a meeting on genocide prevention, the first of a series of four discussions organized by Gariwo, the forest of the Righteous in cooperation with Teatro Franco Parenti.The city of Milan in 2009 had recognized Dink as a Righteous by dedicating to him a tree and a stone in the Garden of the Righteous worldwide on Monte Stella Hill. On the occasion of the tenth anniversary of his death, Milan paid homage to him through the words of Gérard Malkassian's, a French philosopher, promoter in 2015 of a call for reconciliation between Turkey and Armenian that he launched together with other French intellectuals of Turkish and Armenian descent.. Hrant Dink "In the first place marked the awakening of the Armenian community in Turkey, a movement of «Armenian Pride », that is being carried on by the youth movement Nor Zartonk (« new Awakening » or « new Risorgimento »), after 90 years of living in silence, gloomily, in a hostile or at least indifferent environment. Secondly, he linked the reopening of the dark pages of Armenian history up to a renewal of Turkish identity founded on tolerance, truth, and dignity. Thirdly, he promoted the non violent struggle in favor of all ethnic, religious and sexual minorities. His murder, on 17 January 2007, exactly 10 years ago, highlighted to which extent the life of a Righteous man is fragile, exposed to hatred and bullying. And yet, he has become a witness and a symbol of a different kind of civil engagement far beyond his tragic end”.

Among the other initiatives to reassess the topicality of Dink's commitment, we shall mention here the one held in Berlin at Maxim Gorki Theatre, which holds a particular meaning for the presence of Can Dündar, former editor in chief of the Turkish opposition daily Cumhuriyet, in exile in Germany after 93 days in jail and the target of an arrest warrant for spying against the national security and abetting an armed terrorist group. He is one of the many journalists hit by the crackdown of the Turkish government over the recent months.

In France, events were held in Lyon in the street named afterHrant Dink, in Bouc-Bel-Air in the South-East and in Paris with an open letter and a show. In England, in the Church of Saint Sarkis in Kensington, excerpts from Dink's biography by Tuba Çandar (Hrant Dink: An Armenian Voice of the Voiceless in Turkey’) and music played by Armenian, Turkish and British musicians have evoked again the figure of the founder of Agos.

In Canada, hosting a numerous and active Armenian community, a “Homage to Hrant Dink” was held in Toronto on 22 January with the participation of the co-President of the German Green Party Cem Özdemir, who played an important part in the approval of the resolution on the Armenian Genocide by the German Parliament, and pianist Rafi Bedrosyan. An analysis by Zoryan Institute on the historical context of Dink's murder was also planned. In Ottawa, Voices in dialogue (VID), an initiative launched in 2007 for the dialogue between Armenians, Turks and Kurds, planned a conference and the screening of the documentary by Nare Mkrtchyan "The Other Side of Home".

As far as Dink's murder is concerned, the truth is yet to be ascertained. The first trial against the killer, Ogun Samast, closed in 2011 with a sentence to 22 years in jail, without assessing who the mastermind of the journalist's assassination was nor revealing the complicity he enjoyed. The case was reopened in 2014 following the verdict of the Turkish Supreme Court, which revoked the decision of the Prosecutor not to proceed to the indictment of police officers and other involved officials. And a new trial has been going on for months in Istanbul.