"Good people in an evil time” also among the Ottomans

Remarks by Pietro Kuciukian at the Saint Ambrose Basilica in Milan 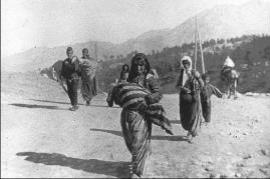 We have gathered in this Basilica, a symbol of Christendom of the origins, for some years, every 24 April, to remember our dead, victims of the genocide of 1915. Today we are celebrating its 99th anniversary, and the suffering is revamped. One million and a half Armenians were exterminated, some of them immediately, others after a nearly endless march in the desert. But not all of them were killed. Someone survived and bore witness, others have started a new life. Centennial discriminations have made us vulnerable, exposed to the violence of genocide, but we exist, thanks to the inner strength of our fathers and mothers and the courage of our Church, We, the descendants of the survivors, have brought history into the spotlight again.   The respect of the truth is a commitment that gains more and more momentum on every anniversary. We have lost our dear ones and our homes, our monuments, our churches, but we have not lost the love for our past and our sense of belonging to a people which can still offer much to the world. Our cultural identity has preserved us from total annihilation. The executioners, besides taking our lives, have tried to take our cultural expressions, which for us represent life and a source of hope, away from us. The evil inflicted to our people has been inflicted to the whole humankind, as well. Today we are serving memory and life. We should not keep suffering in solitude. And we should be grate to the Italian friends who are with us. By looking deeply into the stories of evil we could not help wondering if any goodness has been there: someone who did not betray the friendship bond, some neighbour who was able to be faithful to his own conscience rather than obeying savage orders, a gesture of help which could mean rescue. From some family stories of the survivors we can take tales of “good people in an evil time” also among the Ottomans, who disobeying orders have often followed the fate of their victims. These tales make it possible to us to reconcile the living and the dead, together with this moment that recreates our bond with our dead. Yesterday the Turkish MP Mr. Erdogan expressed his condolences to the Armenians. Could we consider this as a first step towards the recognition of the genocide perpetrated by the Government of the Young Turks? It is the question that we all ask ourselves. We would like to keep hoping in a future of dialogue and reconciliation.