Armenia to start a Day of Remembrance

dedicated to the Righteous and witnesses to genocide 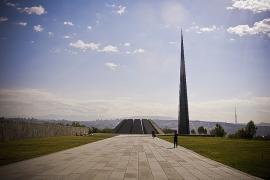 Between 1915 and 1923 in the area of the Ottoman Empire the government of the Young Turks exterminated 1,500,000 Armenians. Many children were forced to become Muslim and women were sent to harems. The Armenian genocide was the first one of the Twentieth century. Every year on 24 April the Armenian people commemorates this massacre with a procession at the Yerevan Memorial.

A law to fight oblivion

Armenia's consul and co-founder of the Gardens of the Righteous Committee Pietro Kuciukian met the President of the Armenian Parliament Mr.Hovik Abrahamian in Yerevan and introduced him to the activities of the International committee fo the Righteous for Armenians Memory is the future, which he founded in 1996.

The goal is to turn this project into a Parliament law remembering the non Armenian Righteous and witnesses to truth who reacted prior, during and after the genocide with deeds of generousity, help, testimony and exposure of the truth, to establish in Armenia a Remembrance Day dedicated to these exemplary figures and promoting educational projects in the schools of all types and grades.

Pietro Kuciukian said: "The centennial commemoration of the Armenian genocide is approaching year after year. The very few survivors, the children and grand children of survivors do not forget. Maybe one day they will be able to pardon. The evil time revealed the face of the villains, but also those of the Righteous, the witnesses to truth who have not forgotten. As witnesses to horror, they have written, documented, cried to the world what had happened in the waste lands of Anatolia, becoming "memory activists'. Their lives devoted to the commitment of testimony prevent the Armenians from feeling lonely and support them in their struggle for the recognition of truth against any kind of genocide denial. Writing history with them makes it possible to hope in a future of dialogue and reconciliation".