an Italian family persecuted by the Communist regime in Crimea 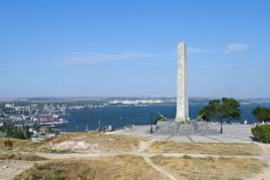 The obelisk of glory, Kerch

an Italian family persecuted by the Communist regime in Crimea

Birth of Antonio Pergolo (the Great-Grandfather). We know, from the tales passed on in the family, that Antonio became a mariner. Navigating on a cargo vessel on his way from Trani to the Black Sea, he decided to stop in Crimea (then Russia), in Kerch, where he married Teresa Mureten, a young French woman from Avignon whose family ran a confectioner’s shop in Kerch.

Two generations were born in Crimea, in Kerch  Kertch, 27 October 1879 Birth of Giuseppe (grandfather), son to Antonio Pergolo and Teresa Mureten. He was baptized on 30 October in the catholic church of Kerch, according to the certificate of the parish priest, father Giovanni Arazoff (who registered it on 28 April 1898). The transliteration used in the Italian document changes the last syllable, turning the surname from Pergola into Pergolo. Giuseppe then got married to Antonina Evangelista from the Italian colony of Kertch, who gave him five children: my father Antonio (1902), uncle Bartolomeo (1904), uncle Gaetano (1907), plus Francesco and Giorgetta, who died young in an epidemic of typhus or malaria. Giuseppe worked until 1910 in Ekaterinovka as chief electrician for a Belgian company, running the local thermoelectric steam plant. Giuseppe’s brother, Gaetano, married – always in Kertch - Lina Bassi, with whom he had two kids: Antonio and Nicola, the fathers of our cousins Alla and Pietro. They keep the Catholic faith, as witnessed by Antonio receiving his first in the church of Novorossisk on 5 April 1915.

The preparations to escape from Russia, after the establishment of the bolshevik communist regime, and the trip to Italy   Giuseppe left the Belgian firm “for political reasons” and began to plan his trip back to Italy with his wife and children. The first one to leave was Antonio, as soon as he obtained his high school diploma in 1920 (together with his Dad’s cousin, Agostina Leconte). Their parents instead remained waiting for their two other kids, Gaetano and Bartolomeo, to finish school and would leave Russia with them as refugees only in 1922, to reach Antonio in Genoa.

Now the family has come together and a slow and laborious adjustment to integrate into social and civil life in Italy began Giuseppe landed a job in Genoa as an electrician at Ansaldo first and then the “Società di Navigazione Generale” since 1925. His son Antonio entered Ansaldo after graduating in Naval Engineering, while Gaetano and Bartolomeo achieved their entrepreneurial success thanks to a company that produced equipment for military and civil ships. Taking root in Genoa is crowned with the weddings of the three children of Giuseppe between 1935 and 1941.

In the meanwhile in Russia, for the Italians left, life was first tormented by “xenophobic terror” – unleashed by Stalin’s Soviet regime- and then by war The Pergolo’s relatives and acquaintances were:

During war- in 1942 and 1943 – after the withdrawal of the Germans, cousins Bartolomeo Evangelista and the following were deported into the Gulags (the former in Siberia), including Nicola Pergolo (to Tagil, Kazakhstan) and Antonio Pergolo (to Krasnoiarsk in the Urals). In 1942 , when Crimea fell under control of the German troops, the “Russian” aunts Rina De Martino Di Fonzo, Nina De Martino Parenti, Anna Di Fonzo Evangelista with their children succeeded in running away and got to Genoa, where they found shelter at the cousins Pergolo’s home.

1956: in the USSR Krushchev, following the XX congress of PCUS, started “destalinization”. With the rehabilitation of the victims and political prisoners persecuted by the communist regime, also the Italians came back from the Gulag. In the Sixties they resumed their correspondence with teir relatives who had remained in Russia (although letters were carefully censored, and it was necessary to avoid by all means any reference to social or political issues)

1965: upon our invitation a few of them came to Genoa including:

Bartolomeo Evangelista, physically undermined for the suffering endured in his long detention in S