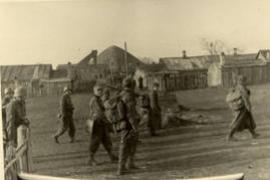 Roberto Anderson was born in Rome on 18 April 1900. The last of 9 children, he belonged to an illustrious family of Rome's haute bourgeoisie, owning a world-known firm of Photographic Arts Publishing. Roberto lived comfortably off and showed a certain ability at Maths, that led him to enroll on a two-year university course in Engineering, although he was not completely averse to lending a helping hand in the Firm where his other siblings and even their mother Clotilde worked.
At that time of great political and economic upheavals, the young university student, fully involved in his education, breathed “with all his lungs” this wind of change and in him ripened the idea of leaving Rome for Turin, the focal point of the working class struggle, as he was inspired by his wish to personally join the new political “change of heart”. We cannot exclude that his decision was also influenced by the arguments arisen with his relatives and especially his father, as well as by a strong adventurous spirit.

On 6 January 1921, Roberto joined the Polytechnics of Turin, faculty of Industrial Mechanical Engineering, after passing the first two university years in Rome with good marks. There is no kind of correspondence with his family in these times, which leads to suppose that during these years in Turin, he frequently returned to Rome to see his parents.
Around 1922 he met Lia, a young Rumanian girl of Jewish descent, born in Bessarabia in 1897 and escaped to Italy to study Medicine in Turin because she was involved in subversive activities. The two lived in the same building and started going out together, discovering they had the same ideals, which would lead them to join the student gatherings and political meetings, which were frequent in those times; first, Roberto attended, only as a sympathizer, the local branch of the socialists in Via Perosa, to then join the Communist Party and become the secretary of Turin's cell in 1924. But the couple was already thinking of moving to Russia immediately after Roberto's graduation, and he claimed the righteousness of his decision very proudly:
«… I really wanted to go to the USSR, even more so because my wife had some relatives there and she insisted to go to the Soviet Union. I asked for authorization to expatriate, forwarding the concerning demand to the Central Committee of Italy's Communist Party, of which I had been a member since 1923 (...). Then I headed to the trade or diplomatic embassy of the USSR to obtain the visa to enter Russia with my wife, who was a Rumanian subject. After nearly 3 weeks I obtained the visa and after a few days I embarked» (from the statement of the first interrogation after his arrest, 20 August 1937).

In December 1924, the two lovers landed in Odessa after a long trip on the “Trieste” steamship. They moved to Moscow and then to Stalino, in the basin of Donec, an area that was hugely rich at mines, where Lia's brother and sister live and where Roberto had found a job as the person in charge of the power department of a big iron and steel factory (13,000 workers) and as the director of the electric plant of the Rykov mine. In the letter he wrote to his parents on 15 March 1925, Roberto eventually mentioned his relationship with Lia, that had started nearly 3 years earlier, with whom he had come to Russia. He also talked about the new concepts in family relations, with the refusal of marriage and consequently a simple living-together.
The young couple, full with enthusiasm, adapted quite well to the hard life of Stalino, where in 1926 their first daughter Paola was born, followed by Pavel in 1929. From 1927 to 1932 Roberto would be in charge of several important job missions to electric industries of a certain importance, both in Stalino and in Bezika and Kercth.
In 1926, Anderson registered nonetheless in Moscow at the British consulate (he had kept the British passport of his family to have better chances to emigrate to the USSR) and in the same year he joined the Bolshevic Communist Party. He found a job in the capital as an Engineer in chief in the Kaganovic factory of pillow blocks, where nearly 30 Italians were employed. He would live with his family at the «Administrative People's House L.M. Kaganovic», the factory's residence, until 1937.
In January 1937 Roberto became a Soviet citizen, giving up both his British passport and any further chance to keep in touch with his family of origins in Italy.

The start of the Great Terror is conventionally considered as to be 3 March 1937, when Stalin spoke before the Plenum of the Central Committee of the Party. Between 1937 and 1938, 204 Italians were arrested, 45 of them where shot dead in 1937 and 51 in 1938, due to the zeal of their comrades, guilty for one of the most merciless man hunts.
A circular letter of Nkvd of 9 August 1937 issued a directive against the foreigners residing in the USSR, massively accused of spying: on 20 August, Roberto Anderson was arrested based on article 58.7 of the Criminal Code for «participation in a right-wing Trotskist terror group devoted to spying and sabotaging», with an order to search his home.
After his arrest, he was no more interrogated by the Nkvd until 26 March 1938, when he was interrogated again, and this time he recognized himself guilty of espionage and said he had been “recruited for the spying job by the agent of the Italian secret services Missuri”. In the following interrogations on 13 and 22 May he said nothing anymore. On 25 June 1938 (nearly one year after his arrest) the Nkvd issued the charges against him for espionage and sabotage, based on which he was tried by the Military Board of the Soviet Supreme Court. On 27 September 1938, in the name of the Union of the Soviet Socialist Republics, in just 15 minutes Roberto Anderson Domenicovic was handed down the capital punishment through shooting with seizure of all his goods, as he had been recognized guilty of the crimes provided by articles 58-6 (anti-Soviet organization); 58-7 (damage against the industry); 58-8 (terroristic intention) and 58-11 (spying activities) of the USSR Criminal Code.
He was shot dead at the Kommunarka the same day. Rehabilitated on 5 November 1955.

From the statements of the trial and the Political committee of the Kaganovic factory, discovered by Elena Dundovich and Francesca Gori, two things emerge:
- Roberto Anderson's crystal clear behaviour – he never reported nor involved anyone and prior to the reading of his verdict he retracted all preceding statements, almost surely extorted from him through the use of force;
- the informing operation by Roberto's deputy manager -a man called Silkin - at the Power department of Kaganovic factory, who after reporting him took his post following his arrest.

«My dearest, we are all fine! Don't worry about our long silence. My work and a little laziness were the reason for this. The kids are on holiday near Moscow, they are fine and say hello to you. Is there anything new about Enrico's issues? Please keep me updated. Love and kisses from your Roberto. Greetings from Lia» (Moscow, 29 July 1937).

This is the last letter Mr. Anderson wrote to his parents.

From the date of this letter twenty long years of silence would go by before his family received news again from Russia. In facts it was only in 1957 that the only letter that his daughter Paola through an eventful journey in the Autumn of the same year, would shed light on the darkness of those years that had prompted Roberto's parents to ask themselves so many questions before dying in pain and in the anguish of not having had any more news about their son. In that letter, written in French, Paola calmed her grandparents saying that, despite the tragic events that had hit them, they were all well; the text though lacks any reference to her father.

«My dear Grandpa and Grandma! Eventually, after many years, I can write to you. I am not so sure, that after many years of terrible war, everything has been restored as it was before. I only remember your address. Maybe my memory deceives me, but I hope this letter will reach you. In the meanwhile I've grown up. Over these years we have endured much misfortune but now everything is over. I would like to hear good news from you and then I will write a long letter to you» (Moscow, 31 July 1957).

We have learned only recently that this letter did it to reach Italy because Paola could hand it to some Italians who were there in those days for the Festival of Youth, who promised they would send it to her Grandparents' address once they would arrive in Italy and the long silence of all those years was due to Lia's prudence. After the arrest of her husband, she had deemed it more convenient to interrupt any kind of correspondence with Roberto's family, for self-explanatory security reasons. The Andersons then wrote more times to the address mentioned on the envelope of Paola's letter, but never received any reply.

In Giancarlo Lehner's book La tragedia dei comunisti italiani. Le vittime del Pci in Unione Sovietica, (The tragedy of Italian communists. The victims of the Pci in the USSR) Mondadori, Milano, 2000, we read that: «Roberto Anderson ……rests in the mass grave of Butovo».
Eventually in the past years, thanks to our research, but especially thanks to Hon. Gustavo Selva and the Ambassador to Moscow Gianfranco Facco Bonetti, Pavel Anderson, Roberto's son, with his daughter Olga and Vera, and Sergej Svetlov, son to Paola Anderson, who died in 1979, were found again.

Now that this mystery has been dissolved, we are looking forward to remembering the figure of Roberto Anderson with a stone in Moscow, together with the one of many other ill-fated.