he was a workman and an anti-fascist Italian communist 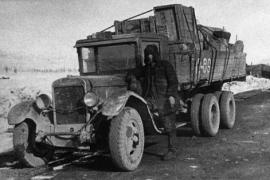 Born in Turin, as a very young man he followed the example of his brother Mario, an underground communist militant. Forced to expatriate to Brussels in 1931, to escape arrest, he worked for Red Aid and applied for a tourist visa for the USSR in 1933, attracted by the idea of making his own contribution to building socialism. In Moscow he was shunned by his comrades, who had learnt that the Party disapproved of his brother Mario, who had stayed in the West. Emilio found work in a factory and did his best to spread propaganda for the regime, but he was marginalized and not acknowledged as a political refugee because he spoke his mind too freely. With no means of support, he was helped by Nella Masutti, a sixteen-year-old Italian who had moved to the USSR with her family to follow the communist ideal. The two fell in love and when Emilio was arrested for "Trotskyite activities " and exiled to Pinega, close to the Arctic circle, in 1935, Nella ran away from home and joined him. They married and stayed together through ‘thick and thin’ until Emilio was once again sentenced, in 1936. Nella managed to leave the Soviet Union along with the rest of her family and settled in France. Emilio was transferred to Kolyma, in the far north of Siberia, where he was shot in 1938. His wife tried desperately to have news of him, but in vain. In 1976 she wrote a bitter “j’accuse” to the Italian Communist Party, but her letter was scrapped without anybody bothering to reply. She collected the letters Emilio had written to his brother Mario during his time in the Soviet Union and managed to get them published in France in 1979, while in Italy her book A Small Stone was not to come out until 1982. Nella spoke out in 1991 in Rome at the first conference on the Italian victims of Stalinism, denouncing the Communist Party’s silence and demanding, along with Baccalà’s widow, Pia Piccioni, that a "stone be laid in their memory. The victims of terror are still waiting and it is your duty to commemorate them as their stories will serve as an example for future generations".