he was a journalist in many socialist editorial offices; he was interrogated and tortured 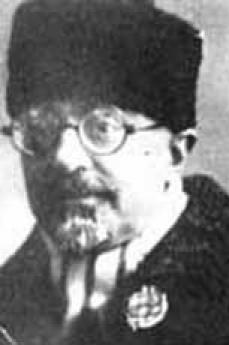 He was born in Naples in 1882, but when he was still a child, he went with his family first to Spain, then to the USA and to many other countries, because of his political militancy. He joined many parties of workers all around the world (in France, USA, Spain, Portugal, Austria, Switzerland, Germany); in 1921 he joined the Communist Party of Italy. He was arrested many times, both in Italy and abroad. He accepted, during his peregrinations, to do the humblest and hardest jobs.
He perfectly knew many languages (French, English, Spanish, German, Russian and Italian) and worked as a journalist in the socialist editorial offices all over the world. He wrote many works about the socialist revolution and an autobiographical book: " Il cittadino del mondo".
He went to Russia and settled down there in 1927. The following year he received the honorary membership card of the Bolscevique Communist Party. He started teaching Italian and History of the working movement in the schools of Moscow and in the clubs of the political emigrants, and held some important positions in the Komintern. Even Lenin appreciated him for his works.
During the Stalinist purges, on the 26th April 1938, he was arrested by NKVD and closed in the Lefortovo prison, where he had to go through exhausting examinations with the accusation of anti-revolution activity.
He was then sent to the Butyrskaja prison and tortured over and over again until the trial, that began on the 16th November 1939, during which he declared himself innocent and asked for justice. He utterly defended himself and forced the judges to ask a supplementary judicial inquiry. On the 14th May 1940 he was condemned for espionage to a five years deportation in the region of Krasnojarsk, in Siberia. On June 1941 he was arrested again; the judge tried to obtain from him a confession and to force him to delation. On the 31st January 1942 a special commission of NKVD condemned him to the death penalty by shooting, for anti-soviet propaganda, with a simple administrative act, without any trial.
On the 7th July 1956 the military College of the Supreme Court of USSR decreed his rehabilitation, because he was "condemned without foundation".