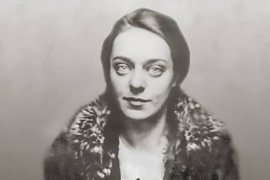 Ariadna Efron (Alja), the first child of Sergej Jakovlevic Efron and Marina Ivanovna Cvetaeva, was born in Moscow on 18 September 1912. Alja had her father’s big blue eyes and was a beautiful and intelligent child. She was also precocious, understanding the poetry her mother read to her, from a very early age, in a singularly clipped and incandescent manner marked by unpredictable pauses and dashes. Marina Cvetaeva was indeed a talented poet, whose verses touched one of the highest and most innovative peaks of poetic excellence in the 20th century.
With the outbreak of the Revolution, Alja’s father Sergej left home to join the White Army while Marina, with Alja and her younger sister Irina, stayed in Moscow. Alja soon learnt to read and by the age of seven she was composing short poems; she also had a great gift for drawing. In February 1920 her sister died of malnutrition.
In 1921, after almost four years, her father managed to send them news of his whereabouts. In May 1922, Alja and Marina joined him in Berlin. The family then moved to Czechoslovakia, where they lived in hardship in the outskirts of Prague. In February 1925 her mother gave birth to a boy, Georgij, affectionately known as Mur.
In the autumn of that year, the family moved to France, where they lived outside Paris in conditions of extreme poverty. Alja made berets and woollen dolls that she sold for five francs each. From 1928 to 1930 she attended the Louvre Museum School, and then the Institute of Applied Art. In those years Sergej became increasingly interested in Bolshevik ideology and showed clear pro-Soviet leanings. Alja, who, like her mother, had been decidedly anti-Soviet, began to share her father’s ideas. This may partly explain why her intense and exclusive relationship with her mother suddenly changed dramatically. In March 1937, Alja returned to the Soviet Union, convinced that she would find a country committed to freedom and social justice. In October, following a murder, Sergej also returned to Moscow, as an agent of the Soviet secret police. Alja was happy; she was back in her great country, she had a job at the “Revue de Moscou” and had met and fallen in love with Mulja Gurevic. During that period she got to know Boris Pasternak, whom she had first met in July 1935 in Paris, where the poet was taking part in the first congress of anti-Fascist writers. In June 1939 Marina and Mur, who had remained in Paris, came back to the USSR. Re-united, the family lived in the Bol’ševo dacha, close to Moscow.
In August Alja was arrested and charged with complicity with her father, considered a traitor. These difficult circumstances helped to heal the rift between mother and daughter. Alja was sentenced to eight years in the gulag. In October 1939 her father was also arrested and was shot two years later. When war broke out, Marina Cvetaeva left Moscow with Mur, but then hanged herself in Elabuga.
Released from the gulag in 1947, Alja settled in Rjazan’, where she taught graphics. At the beginning of 1949 she was arrested again and sentenced to a life of exile in Turuchansk, in Siberia. From Turuchansk Alja started an intense correspondence with Pasternak, who sent her the very first manuscript of Doctor Živago. Rehabilitated in 1955, Alja returned to Moscow where she dedicated herself to tracing and publishing her mother’s manuscripts; she also wrote a book of memoirs about her: Marina Cvetaeva, my mother, which was published posthumously in 1979 in Paris. Ariadna Efron died in 1975 in Tarusa, the enchanted place of her mother’s childhood.