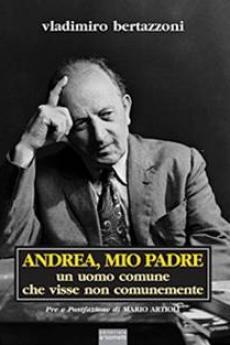 Testimony by his son Vladimiro – Mantua and Milan, 9 November 2005 (remarks delivered at Palazzo Marino in memory of the Italian victims of Stalinism)

Although he did not lose his life, my father Andrea Bertazzoni, filed in the USSR under the surname “Mukas”, can be considered as a victim of Italian-Soviet Stalinism. I was asked plenty of times why he did not end up in the Gulag or shot dead or imprisoned in the years of the purges. Russians themselves, when they learn about my father’s presence in the USSR from 1932 to 1946, ask me full of curiosity: “And they didn’t jail him?”. When I answer nope, I read a sense of surprise on their faces. Is it ever possible? There is no answer to this state of things, which escapes any logic or criterion. The most appropriate image of those years is the “Russian roulette”. Everybody had a gun barrel pointed to their heads, but not everybody was shot dead.

A similar situation had been endured by my father during World War I. Based on article 92 which provided death penalty, he had been sentenced over self-inflicted wounds, refusal of murdering and being murdered, and handed down a 20-year term in a military confinement facility. One of his fellow soldiers, for deliberately wounding himself at one finger, was shot dead (see Plotone di esecuzione, by Forsella-Monticone).

In the USSR he had several “good opportunities” to be jailed. On the one hand the Russian secret police already put a great deal of effort into hitting the so called “people’s enemies”, the traitors of the cause, the dodgers, the Trotskians, the renegades, and the social democrats, on the other hand they were given a helping hand by the people in charge of our antifascist emigration, who reported to the NKVD the fellow nationals who, in their opinion, did not feature unequivocal signs of communist “ideological purity”.

Never so suited appears to be Pietro Nenni’s sentence: “There is always someone purer who purges you”. I will sum up in a few lines some of the “good opportunities” my father had to end up in jail:

In 1939 Robotti, during interrogations in jail, told the names of the Italians “who did not fully understand the politics of the USSR and the Soviet government… Did not accept the Bolshevik kind of criticism of their faults…”. The list included my father’s name. Some of the people listed had a sad fate. And when, as remembered by Felicita Ferrero, our accused told the police to ask the Italian leaders about their non involvement in the charges, cops would reply: “But if it was precisely them…” who reported the other Italians.

Another “good opportunity” occurred in Uzbekistan, when my father was called to work as an interpreter in camp no. 26, where 2.000 Italian prisoners were interned. We were in 1944. A Soviet official reported my father over falling under the influence of fascists, because he opposed some mishandling that certain officials, despite the international agreements, inflicted to our soldiers. The report was followed by the official’s demotion. The conference held by my father to the prisoners started like this: “Dearest fellow nationals”. What a scandal! A jailer who treats prisoners like that! Many prisoners, after getting back to Italy, bore witness to the humane and understanding attitude of “commissioner Mukas”.

If the years of Stalinism experienced in the USSR did not have tragic consequences for inscrutable reasons, even though they caused a great deal of tension and even despair sometimes, the “made in Italy” Stalinism had no delay at producing its effects. Having come back to Italy in Spring 1946, Bertazzoni (already persecuted by fascism, jailed, expatriated to France for 7 years and the USSR for 14 years) was expelled by the Italian Communist Party, which published news in the press regarding the measure against him entitled as “Revolutionary surveillance” providing the following motivations: “Bertazzoni has proven to hold no communist ideology, but rather to be essentially imbued with a narrow social democratic mentality”. It seems to read the typical reports sent by the leadership of the Italian Communist Party to the Soviets.

Those were the years of the events related to the “renegades” Magnani and Cucchi (partisans, Members of the Parliament from the region Emilia who criticized Togliatti’s leadership for its subjection to Moscow). Those were not only disciplinary measures, but also forms of persecution, isolation, sacking from his job. A situation, which was experienced by our family and similarly Magnani and others, well described by Franca Magnani in her book Una famiglia italiana, when relatives, uncles, cousins were urged by the Pci to point to their own relatives as “infamous” people.

Now many decades have gone by, but it is right not to forget... in the direction so often indicated by Nella Masutti, Pia Piccioni, Dante Corneli and many others who in vain had demanded the recognition of the errors, forms of complicity,  abandonment to their tragic fate of many Italians, by an Italian Communist Party which for so many years did not heed the calls and did not embrace the cry of despair of Emilio Guarnaschelli: “Comrades, we were wrong! Don’t lose heart”. Today, with the victims, we also remember their relatives, who were subject to the consequences of a despotic concept of civil, social and political life.