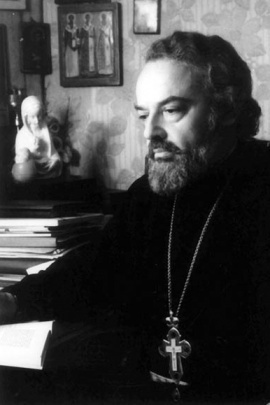 Baptized into the Catacomb Church and later ordained as a Russian orthodox priest in 1960, Father Alexander Men had an increasingly strong influence on intellectuals and worshippers in the parishes in and around Moscow. At the end of the Sixties he completed a history of religion, in several volumes. This was published in Brussels, in Russian, under a pseudonym, between 1970 and 1972, and was then widely "smuggled" into the officially atheist USSR. By the late Eighties, the Soviet Union had started to open up politically, socially and culturally and broad fields of activity seemed to be opening up for Father Men, but on 9 September 1990 he was axed to death by an unknown assassin, who cut short the life of a leading exponent of post-Soviet Russia’s spiritual rebirth.