the main characters of a book by Svetlana Broz 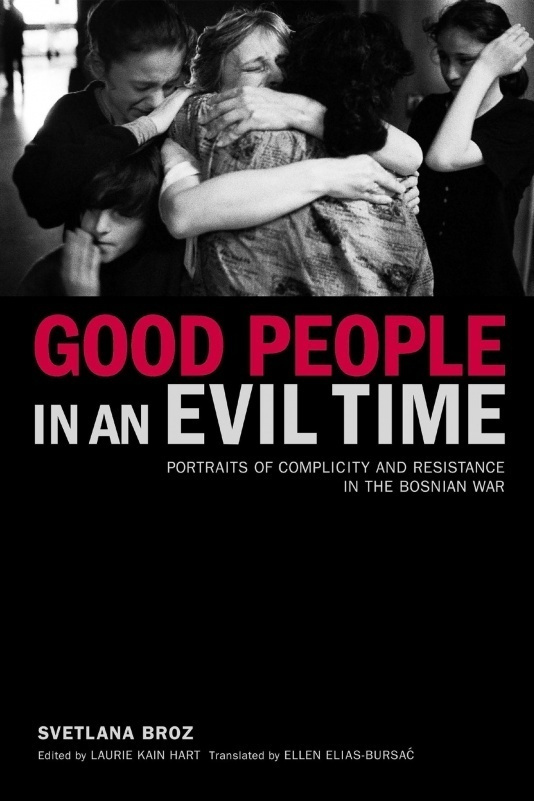 First hand accounts collected by Svetlana Broz in her book Good people in an evil time. Testimony of the Bosnian war (for safety reasons, names have been changed or omitted)

Hamid Dedovic, Ilidža, October 1998
Hamid is a Bosnian Muslim. When fighting broke out with the Serbs, he stayed at home in Ilidža, because he did not expect things to get too bad. He was wrong. One day, six bearded men stormed into his house and starting knocking him and his family about. A neighbour tried to defend them and they maltreated her too. Worse was still to come. The militiamen take Hamid to the place where Muslims were being rounded up, a place of killings and torture. Hamid was spared because Bora, a friend of his, begged the guards to release him, challenging them to kill him, a Serb, instead of his Muslim friend. Hamid escaped to Buca Potok and survived the war unscathed thanks to the Serbs who lived there.

Saban Efendic
Saban Efendic is a Muslim from Sarajevo. He was thirty-eight when he was captured by Serb soldiers and sent to a forced labour camp. There treatment was harsh and he lived under the constant threat of death to his whole family if he tried to escape. The guards were Serbs who had refused to fight and were made to believe they were guarding Muslims captured in battle. One of them however, a man named Mirko, discovered the truth and established a respectful human relationship with Saban.
Dane, a high-ranking policeman, was another Serb who came to Saban’s aid. Not only did he ensure that the essential items stolen from him by the Chetniks were returned, but constantly checked to make sure that he was not maltreated and, in case of need, invited him to his own house. When the opportunity arose, he took him in and then helped him to escape to the other side of town. “I don’t approve of their methods – he explained, referring to the soldiers who were committing acts of violence against the Muslims. – I’m a fucking Serb and I am fighting for a fucking Serb Republic, but not in the way they are doing it. If you were on the other side, pointing a gun at me, I would fight you, but in this way no!”

Zorica Baltic
Zorica Baltic managed to escape from the hellhole of Mostar thanks to Croats and Muslims. On 2 August 1992, a group of soldiers broke into her apartment in Mostar and shot her husband at point blank range. Terrified, Zorica tried knocking on all her neighbours’ doors, but only Debo Vajovic and his wife were prepared to help. The next day, Andelko Filipovic, a Croat and former neighbour from years back, came to see her. Despite an atmosphere of manifest hostility, this man demonstrated his sincere sorrow for the murder of Zorica’s husband and had the courage to arrange for his burial and to host his widow. Another Croat, Ivica Federcija, who had worked for Zorica years before, invited her to her home no fewer than fourteen times in twenty days. Last but by no means least, a Muslim woman doctor Meliha Imamovic came to Zorica’s aid by arranging for her to be admitted to hospital, so as to hide her, with the support of a psychiatrist colleague. The only condition was that, for the sake of her own safety, Zorica was not to get out of bed for any reason.

Iljia Konjic
During the conflict in Bosnia, life became extremely hard for the Croats, nicknamed “ustascia" by many, even when they had not been personally implicated in the region’s Fascist past and were only trying to lead normal lives in what was left of Yugoslavia. All the parties engaged in the struggle set up concentration camps for their enemies and in one of these, Iljia Konjic, truck driver and father of six, witnessed prisoners being beaten and tortured out of sight of the few foreign observers allowed into the country to document the war. One day Iljia witnessed Dragan Peric giving the names of all the prisoners to the inspectors of the Red Cross, a courageous gesture that could save numerous lives and that cost Dragan Peric a severe beating at the hands of the guards.

Nura Mehmedbegovic
Nura Mehmedbegovic is a Bosnian Muslim woman affected by a brain tumour. Her doctor was a Croat, Marko Cigler, whom she affectionately called “uncle Marko” or also “father Marko”. She was indebted to him not only for the care and treatment he gave her in time of peace, but also for her existence in time of war, when the life of a woman on her own, a Muslim and, what’s more, with an important surname, that of the founders of a city claimed by the Serbs, was really in jeopardy. Father Marko or “Japek” Marko, as they say in Serbo-Croat, in fact, simply could not bring himself to abandon this woman without assistance and without the daily injections that kept her alive. He even arranged for Nura to move into another part of Sarajevo when she needed hospital treatment and did so under the Serbs’ threat of leaving him “one head shorter” if her transfer became definitive and Nura refused to go back to the inferno raging in the district she lived in.
"Japek" Marko would not be intimidated and helped not only Nura, but anyone in need: he offered an old lady the little bread he had, and another woman a kilo of salt. He helped everyone, regardless of their nationality and with tears of compassion in his eyes for their suffering. And this is why, after her treatment and despite the risk of being killed or deported, Nura returned without hesitation to the lodgings the doctor had found for her. On this point, she told Svetlana Broz: “And even if I had known for sure that by coming back I would meet my death, I would have continued down that road, fearless and with my soul at peace, conscious of the fact that I would be giving that man what he deserved: a life for a life, human kindness for human kindness”.

Serafina Lukic
One October day in 1998, Serafina Lukic, a Croat, was trying to cross war-torn Sarajevo with a piece of firewood to burn, given to her by Senad, a Serbo-Bosnian soldier. She desperately needed to heat up her apartment, because her two-year-old niece had pneumonia. The road was bristling with danger, but a man gave her a lift in his taxi and delivered her home safe and sound. Later she was to learn that he was Mile Plakalovic, a Serbian taxi-driver who had already helped numerous others, for example, picking up people wounded by sniperfire and taking them to hospital.
Several people had already shown Serafina their solidarity since war and hunger had become part of her life: from sister Dinka Galic of the Marijin Dvor Catholic church, to the commander of the Serbo-Bosnians Enver Šehovic, as well as members of the Jewish Centre, such as Albert Abinum, Nada Levi and Ela Kabiljo. The whole Yugoslav ethnic mosaic had ensured Serafina and the six members of her family food, comfort, firewood and clothing. Now she would like to remember all these Righteous people: Mile Plakalovic, who has already become famous thanks to the lifts he gave in his taxi, and also all the others, who perhaps only she knows to be Righteous.

Collective testimony about Anica Zekar
Anica Zecar is an old partisan. During World War II she went “underground”, so she was used to coping with difficult situations. When the Bosnian war broke out, she was already suffering from Parkinson’s disease, but she thought she could manage and had no qualms about being left alone when her husband and sons escaped from the Grbavica district of Sarajevo and headed for Zrenjanin, in Serbia.
As she had in times gone by, Anica helped anyone fleeing from persecution. Those she rescued include a Muslim, a Croat, a Kosovan Albanian and two Serbs. Anica passed them off as Serbs or as Muslims as required, and used a special code to let them know when soldiers were in the vicinity.
Her neighbours tried to give a hand too: there was a pharmacist who brought her medicines for her condition, another neighbour who got new windows installed for her after a bombing raid, Josip who brought her humanitarian aid parcels and Ismet who managed to find an oven in which his wife cooked for everyone and who carried Anica’s saucepans up and downstairs because she was bed-ridden. In this apartment block, they still all help each other today and one person that Anica helped, recognized her and actually introduced her to a man she had rescued in 1942. Solidarity for this old partisan also comes from the Jewish Centre: Ana Klak put her name down for a support programme for the elderly, the sick and people living alone.

Collective testimony about Jole Musa
During the Croat attack on Mostar, public official Jole Musa refused to leave his own home because it would have been like surrendering and he also refused the offer to become mayor of the war-torn city, fearing that it was a move to pave the way to extreme nationalism. His refusal cost him a stint in prison and to various attempts on his life.
One day, a procession of refugees was passing in front of his house and didn’t know where to go. Jole took about thirty of them in for the night and, the morning after, his youngest son distributed them out to the houses of friends and relatives.

Gardens that honour The "good people" of Bosnia