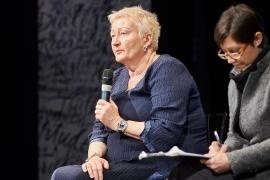 Seizing the occasion of International Holocaust Remembrance Day, we wanted to have with us Svetlana Broz, Bosnian cardiologist, grand-daughter to General Tito (who was from 1953 to 1980 the President of the Socialist Federal Republic of Yugoslavia), honoured as Righteous in the Garden of Milan for her commitment in favour of reconciliation during the war in the former Yugoslavia. On stage, we asked her some questions, starting from the events that unfolded in that conflict, in order to understand with the pupils in our audience what the warning signs of evil can be and how to counter them. Here are her words.

Yugoslavia was a multiethnic society, in which though, at a certain point, hatred broke out, becoming war and genocide. How did that happen?

First of all, I would like to set the issue into context. In Yugoslavia coexisted over 120 different ethnic groups. Five years before the outbreak of the first conflict, politicians orchestrated toward the population a true method of mind control, through the media. They did so by telling lies on a daily basis about what had been a common past, by distorting history, by intimidating the people, by convincing the people that their neighbour was their foe. Unfortunately, if you listen to the same lie every day, you start believing in it. This is a lesson that comes down to us from World War Two, at the times of Hitler, when Joseph Goebbels said: “Repeat a lie a hundred, a thousand or a million times and it will become a truth”.

After these five years of indoctrination, people started being afraid of the others. That was enough for the politicians to pass on the idea that war was possible, in order to make the population accept the idea of a need for conflict. It was a manoeuvre of mass fear-mongering, which though did not amount to hatred, yet. Fear is the last step before hatred. To all the youths who are here today, I want to say: don’t let yourself be trapped in the spiral of Evil, which leads us to feel hate against the others. In Yugoslavia, that way, the war broke out, under the presidency of Milošević and at the hands of the military forces. People nonetheless – and I know because I have been in Bosnia for two years during the conflict and then because I lived there for long – did not see in their neighbours the responsible for the first shellings, the first deaths and the first homes set afire. The same plot was repeated on and on, a story of persuasion that took place in Croatia, Bosnia and the other hit zones: fear convinced people that there were a group of perpetrators and a group of victims. The blame for starting the violence was always put on someone from outside, from a different ethnic group. This was an abuse of power, the governments wanted the war, above all in Serbia and Croatia, and let the people believe it was necessary. Fortunately though, in most cases, they did not succeed in instilling the totalizing hatred, which they pursued.

How can it be possible that at the dawn of the 21st century war was waged on the basis of something which was not hatred but rather fears? And yet it happened in Yugoslavia. You must not fear the other, you must be open, and discuss if you have any problems. Because fear leads to hatred, a feeling that first of all destroy ourselves, not the ones we hate.

Would you have ever imagined, before the outbreak of the war, that things would reach such a stage? And today, reflecting on what happened, could you tell us what the warning signals of Evil and hatred were if there were any?

Honestly not. At the last year of the Medical School – I wrote it in my book, as well – I refused to follow the course of War Surgery because I thought there would never be a war a conflict in my country. That happened 12 years before the first war in Yugoslavia. It was a terrible mistake. Some warning signs were there. After understanding that the media published some falsehoods and distorted the truth, with hindsight I can say that it might have been possible to understand some symptoms, if I had had previous experience or had been told about some other country’s experience, for example. Now that I know, I can warn you: pay attention when you read or watch something in the media, ask yourselves whether it’s true or false, unfortunately at that moment I did not know I should have done.

Today I try to observe the use of the media all over the world, and it seems to me as quite clear that, almost everywhere, they are misused. It does not always happen, of course, but there are many influential politicians who try to take advantage of the media in order to attain their goals. You, who are the voters of tomorrow, have a responsibility: you will have to decide for whom to vote and you have to think thoroughly of who deserves your trust because you could put it into the wrong hands, the ones of some politician who will have a harmful influence on you. Yugoslavia is an example of the fact that this can happen.

Do you think people were aware that, from the words of hate towards the different ethnicities an religions, it was possible to escalate to war? And what can the war in the former Yugoslavia teach the European youths today?

We must always reflect on the past and use the experience to try and not repeat the same mistakes in the future. People must not be afraid of the others, regardless of their ethnicity, background, religion or political creed. We must welcome all human beings and be open to dialogue: every negativity must be discussed, otherwise, silence leads to hate. It seems as though many politicians in Europe are exploiting fear for their purposes. Who knows how it will end up? It could lead to war, violence, aggression against minorities and refugees. People might be expelled from a country or shut into concentration camps as happened during World War Two, or recently in the Balkan war. No one can predict what will happen, but this all is absolutely unacceptable for any moral and civil person. The economic issues are important, it’s true, but certain things are more important, an these include the attempt to oppose the dangerous mechanisms of hate against the different on which political strategies are designed.

Sweden, as we know it today, is an extremely developed and democratic country. Yet, I was there 10 years ago to attend an exhibition on World War Two that told about the deeds and attitudes of the Swedes about that conflict. There were pictures of demonstrators, with plasterboards with the writing: “We don’t want the Jews”. Swedes did not want to welcome those people in dire need for shelter, because they feared they would lose their jobs, there would be too much competition, resources would not suffice and so on. There was also a picture of the Prime Minister shaking hands with Hitler. People seemed happy to produce uniforms for the soldiers. Sweden thus is a country that can show how we can learn from the errors from the past to become better people, refusing the attempts to convince us that for our interest we could reject our principles of humanity and our desire to help those in need.

You left the white coat and the stethoscope for the recorder. Why? What prompted you to become a witness to the tales of Good?

During the first year of the war, I volunteered as a cardiologist to help the people in need, whichever ethnic group they belonged. I asked them about their health conditions, but often they wanted to talk about something else. For them, it was more important to tell me that someone had rescued them and that someone often belonged to one of the groups that had been identified as their enemies. However, they had helped them all the same, sometimes losing their lives to this, as they were considered as traitors. Why did they tell me about that? I came from Belgrade and those patients knew I had more chances to rescue myself and probably they would never see me again: they wanted to leave a tangible trace of the fact that the humanity won against the war, in the hands of someone who could tell it to the world. When I understood this, I understood the importance of the moral role that I had been given, and that I could not ignore the trust that those people had in me. I put my career as a cardiologist into the background in order to record the tales of those who had the courage to say no, not to turn a blind eye, to save the others, and to say: “You have to kill me first”. It was necessary to pass on to the new generations, to teach them to take them as their reference point and not be silent in the face of injustice.

Is there some story of courage, in particular, that could inspire us?

I would have thousands of stories to tell. One thought, more than all others, even if it is not in my book, because I learned about it only afterwards, thanks to a man who came to talk to me in a café. He, his wife and their two twin 4-year old kids were in a concentration camp, in the area of an elementary school, that had unfortunately been seized and used for that purpose. One day, forty of them were chosen and lined up in front of the school. The perpetrators started pushing one of them and, at the moment, the man who told me the story realized that he was his best friends. The villains, after pushing him, asked him to pick ten people out of those forty – that included also the two twins and the wife of his friend -, and the way he would have liked them to be murdered. He started looking in those people’s eyes and, turning himself to the perpetrators, he shouted: “Be ashamed, they are innocent, you must immediately let them go”. And then to the forty people, he said: “I am sorry I cannot do anything more for you, but tomorrow I will be dead”. The man was taken some meters away and murdered in the place, despite the fact that he was of the same ethnic group as the perpetrators. He knew he would be murdered but he accepted his fate rather than remain silent. No street or square is named after the unsung heroes like him. We will become a normal society when our places will carry the names of the saviours of humanity.

How can we prevent anything similar from happening again in Europe?

In order to avoid it, we must recognize the signs in advance, have the sensitiveness to protect the people who are targeted or persecuted, defend human rights and never accept their violation. All European societies should start taking up the responsibility of holding those on power accountable, as it is in the span of control, and a duty, of all citizens. Our teachers are the Righteous and we can learn a lot from them.

The memory of the Righteous to rediscover the soul of Europe