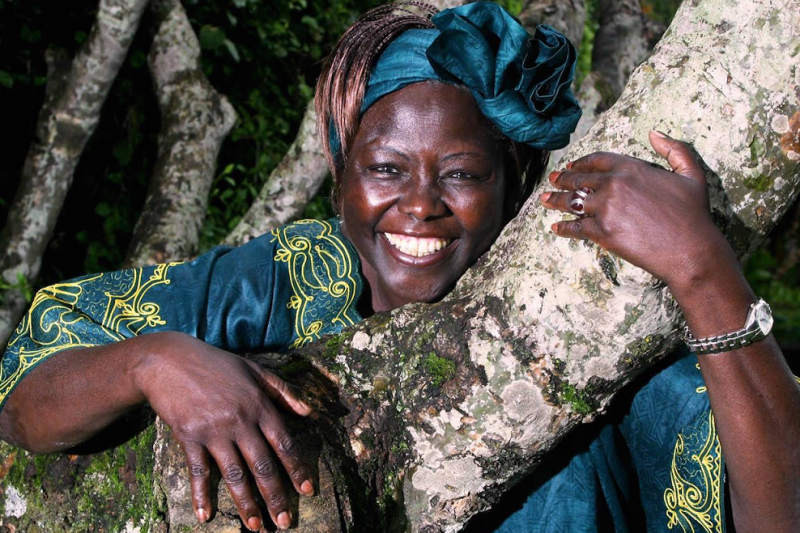 Wangari Muta Maathai was a biologist, environmentalist and kenyan political activist. She was born in Nyeri (Kenya) on April 1, 1940. She was the first Central African woman to obtain a degree in Biological Sciences (1966) and became chair of the Department of Veterinary Anatomy to Nairobi University. She started her political career in 1977, founding the environmental non-governmental organization Green Belt Movement. Since 80s she promoted an awareness campaign on environmental problems and logging. She promoted the planting of  more than 30 millions trees in Kenya and in other african States. Her interest included also human rights, in particular women’s and children’s rights, and the struggle to democracy and multiethnic society. Her action contributed to draw national and international attention about politic oppression in Kenya, by encouraging african women to fight for a better life. She was hit, defamed, and imprisoned many times for her critics about corruption to kenyan regime. In 1997 Maathai became the symbol of the female leadership because she ran against the president Daniel Toroitich arap Moi. In 2002 she was appointed assistant minister of environment, natural resources and wildlife until 2007. Green Belt Movement has paved the way to all levels society development with a educational, family planning, aware nutrition and struggle against corruption. Maathai became the symbol of the best african forces and the struggle to promote peace and welfare in the continent. That’s why she winner lots of international awards, such as the ONU’s Global 550 and the Goldman Environmental Award. In 2004 she was the first african woman to award the Nobel Peace Prize, for her “contribution to sustainable development, democracy and peace”. She decides to celebrate it in the best way she knows: by planting a tree in the red earth of the valley dominated by Mount Kenya. In 2006 Maathai published her memoirs, Unbowed: A Memoir, Alfred A. Knopf. She died of cancer on 25 September 2011 in Nairobi.

The Peruvian activist who’s struggling against the &quot;Yanacocha&quot;