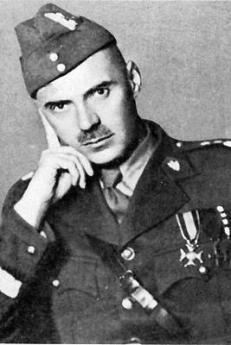 Władysław Anders was born on 11 August 1892 in Błonie near Kutno in central Poland, in a family of German lineage belonging to the landed gentry. He attended the Russian cavalry school for army reserves’ officers, the Riga Polytechnicum, and courses at the Academy of General Staff. Following the Bolshevik Revolution of 1917, Anders took part in the uprising of the 1st Uhlan Regiment of Krechowce. In 1918, together with the uhlans, he capitulated to the Germans, then managed to join the Polish Army. During the Greater Poland Uprising of 1919 he performed the duties of the Chief of Staff in the Greater Polish Army.

In 1924, he earned the degree of qualified colonel. When the events of May Coup of 1926 took place, he supported the government forces against Józef Piłsudski. In spite of this, he was held in high esteem by the Marshal in the following years.
During the Polish defensive war, in 1939, Anders joined the „Modlin” forces in the fights which took place in the area of Płock and Warsaw.
On 29 September 1939, he was taken captive by the Soviets in the Sambir region. Considering his prior merit to the Russian army, the NKVD attempted at winning him over to collaborate, by offering a position in the Soviet army. Due to the prolonged interrogations, Anders escaped the fate of colleagues, the Polish officers murdered in Katyn; the violent questioning sessions failed to compel him to join the Soviet party. In February 1940, he was therefore transferred to the NKVD prison in the Moscow Lubyanka, known for its harsh conditions.
The Sikorski-Mayski Agrement of 1941 allowed for the formation of a Polish army on the Soviet territories. Initially, the newly-formed army was to be led by general Stanisław Haller. The latter was, however, nowhere to be found – the Commander In Chief did not yet know that Haller had been murdered by the NKVD in Kharkov in April 1940: the facts, along with those concerning the 1940 killings in Katyń, were kept secret by the Soviet authorities. Therefore, the Commander Władysław Sikorski entrusted the mission of forming the polish army to Anders.
General Władysław Anders, released from prison on 4 August 1941, initiated the formation of the Polish army. This constituted a great opportunity for Polish people dispersed in the vast territories of the Soviet Union. The Polish men joining the army were physically exhausted, devastated by the lack of contact with families, and by the years spent in Gulags. Thanks to Anders’ interventions, also paramilitary civil forces were created consisting of women and children, so as to save the largest possible number of Polish people from misery. Simultaneously, with more and more men coming to get registered, Anders never ceased his efforts searching for the officers murdered in the Katyń forest.
The Soviet authorities systematically reduced the food rations administered to Polish soldiers, and the decision ordering amnesty for Poles did not reach all Soviet camps and prisons. The poor material situation of the new Polish army was somewhat improved by supplies of uniforms and equipment from Great Britain. Due to various difficulties, Anders was convinced that the Polish Army, instead of staying in the Soviet Union, should move to the Middle East to serve under British command.
Against the will of the Commander In Chief Sikorski, the army was transferred to Iran where it was turned into the Polish II Corps in 1942. The Corps then moved to Iraq and Palestine where the soldiers were given training.
In 1944, the II Corps, now under British command, was transferred to Italy. Its most significant victory proved to be that in the battle of Monte Cassino. By taking the abbey by the fourth assault launched on 18 May 1944, after the unsuccessful attempts on the part of troops from New Zealand as well as British and American divisions, the Polish army broke through the Winter Line and laid the way to Rome open for the Allies.
The Army was also victorious in the battle of Ancona and successful in taking Bologna. After the war action had ended, the general stayed in exile. In 1946, the communist authorities of Poland deprived him of both Polish nationality and military titles.
In 1949, Anders published a war memoir entitled Bez ostatniego rozdziału („Without the final chapter”), now interpreted as his testament. He proved an important figure among the Polish émigrés, and thanks to commentaries published in the foreign press and broadcast via the radio, he became the voice of all his exiled compatriots. In 1954 he was chosen member of the so-called Council of Three, i.e. the collegial body of Polish authorities created by the Government in Exile in London.
Władysław Anders died on 12 May 1970. In accordance to his wish, his body was buried at the Polish War Cemetery near Monte Cassino.

Biography written by the students of secondary schools in Warsaw Adrianna Żurawska, Anna Janik, Karolina Żurek, Klaudia Przybysz, Daria Dymkowska during a project conceived by the History Meeting House (Dom Spotkań z Historią). The students prepared also lists of reference works and films, and registered interviews with persons who used to know the selected figures of the Righteous. The project is co-financed by the Museum of Polish History in Warsaw within the programme "Patriotyzm Jutra" ("Patriotism of Tomorrow").