a call and a trip to Prague 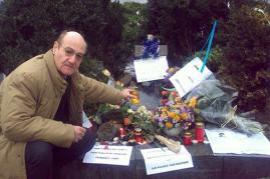 On 16th January 1969, the 21-years old Czech youth Jan Palach turned into a human torch to protest against the Soviet military occupation and the bloody repression of the Prague Spring.
On the fourtieth anniversary of his sacrifice for the freedom and democracy we remember him with words from the spiritual will that he wanted to leave us.
Since our peoples are on the brink of despair and resignation, we decided to express our protest and to shake the people's conscience. Our group is made by volunteers ready to burn themselves for our cause. Since I had the honor to extract number 1, it is my right to write the first letter and to be the first human torch. We strongly advocate the abolishment of censorship and the prohibition of Zparvy (the newspaper of the Soviet occupation forces). Unless our requests are fulfilled in five days, on 21st January 1969, and unless our people gives enough support to these requests by going on general and unlimited strike, a new torch will burn. Jan Palach, 16/1/1969

honoring the memory of a hero of freedom

We, who forty years ago were engaged in the Student Movement in Milan, could have done more when the twenty-one-year-old Czechoslovakian Jan Palach transformed himself into a human torch of freedom on January 16, 1969 in protest of the Soviet military occupation of his country and the bloody repression of the Prague Spring.


While many of us were struck by the drama of that extreme gesture, the Movement failed to fully grasp its historical and strategic breadth. Jan Palach denounced Soviet oppression and interpreted the determination of Eastern European peoples to regain the same fundamental liberties that we so passionately pursued in our street demonstrations for Viet Nam and other peoples in their struggles for independence.


It was partially thanks to the fire that enveloped young Palach that we worked alongside Charta 77, Solidarity and Soviet dissidents during the following decade up to the fall of the Berlin Wall. Nevertheless, with the same sincerity with which we reaffirm our commitment to democracy, the affirmation of the voice of the people and the uplifting of the oppressed, our generation also must show the intellectual honesty of recognizing the debt that is owed, still today, to Jan Palach and his sacrifice.


And so we will be in Wenceslas Square in Prague on the anniversary of his gesture to pay him tribute and remind young people today, in the words of Alexander Dubček, that we are “capable not only of comprehending the world but also of transforming it”, provided that we can gaze upon reality with intelligence and honesty.