My memory of Tadeusz Mazowiecki 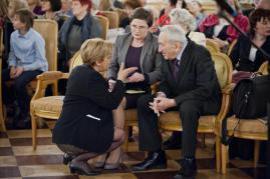 “On 10 May 2012 the majority of the European Parliament approved a resolution establishing the European Day of the Righteous to be celebrated every year on 6 march. By the term ‘Righteous’ we define the people who have risked their lives to rescue other people’s lives and those who have defended human dignity during Nazi and Communist totalitarianism, in the course of genocide cases and mass murders and of all the crimes against humanity perpetrated in the 20th century.

The initiative to commemorate the Righteous is particularly important for our country, that has experienced terror under both forms of totalitarianism. The figures of those who did not hesitate to bring others into safety deserve the greatest degree of respect and being remembered by the future generations. In joining this noble endeavour by Gariwo I wish to invite you to take part in the Honorary Committee for the celebrations of the Day of the Righteous, whose aim will be to actively spread this idea in Poland and make everything possible to create a Garden of the Righteous in Warsaw.”

These are the words Tadeusz Mazowiecki, the first Polish non communist PM, wrote in the conclusion of his invitation to join the Honouring Committee for the creation of a Garden of the Righteous in Warsaw, which he chaired. On 6 March of this year, on the first European Day of the Righteous, he chaired the first hearing of the Committee, which he strenuously supported, and he did not want to miss the concert that was held on that very evening at the Royal Castle. Certainly, the PM’s prestige enabled the Committee to rely on the participation of some of the most significant figures of the Polish political and cultural world, because, although he had resine, he remained for many a sure reference point and an undisputed moral authority, up to the point that President Komorowski had wanted to have him by his side a san adviser. Personally, I had gotten to know him quite well at the end of the Seventies, when he was the chief of the Wiez editorial staff and he was one of the most active members of the Clubs of Catholic Intelligentsia.

The Italian magazine and publishing house CSEO (Centro Studi Europa Orientale), which did a major work of popularization of Eastern dissent in the West, published many of his texts, which were so significant because they underlined the urgency of a formative work within the Catholic laity, and not only there, which had to be focused on the working class. This work he ran over time gave him the opportunity as well as necessary credibility to chiar the Expert commission during the Danzig strikes in 1980, and paved the way to a sound and deep friendship with Lech Wałȩsa.

In 1983 CSEO managed to take to Italy Internato!, his diary from the internment, and this and this further strengthened this heartly friendship which had already been there and would never interrupt. During our last meeting in past February, recalling the key role he played during the Danzig strikes, he told me: “When I got to know what was happening in Danzig I immediately thought we should not live the workers alone, this is why on 20 August, along with other people, I wrote an appeal which was then signed by dozens intellectuals to support the workers. I brought it to Danzig with Bronislaw Geremek. Along the road we had to make a lot of shifts and turns to escape the police car that was following us, this is why it took us a long time and we arrived maybe on 23 or 24 August. Then we had to wait before the gates, and in the end Wałȩsa, whom I had not met before, arrived. After reading our call he asked us abruptly: 'How do you think you could help us? Are you determined to stay with us until the end, whatever happens?'. After a long meeting we thought wr could set up an expert commission, which would have consultive power and would not be operative. To me it was really important that the intellectuals would not claim to take the place of the workers. Negotiations with the government were very diffcult. Tension was high, we did not know how things would end up, what the police would do, and we could expect a Soviet attack. But we were very determined to create a free trade union, to demand release of political prisoners, freedom of speech and also the radio broadcasting of Sunday Masses. This determination led to the birth of Solidarność, a great movement with ten million subscribers that has changed for ever Polish reality in a non-violent way. It was a moment of major liberation, in which a feeling of freedom and responsibility prevailed.”

Tadeusz Mazowiecki’s death yesterday morning stirred a lot of emotion in Poland and many were the reaction to the news. According to the most important Polish daily, Gazeta Wyborcza, “Tadeusz Mazowiecki was not moved by corrupt power greed, and he has probably been the best prime minister in Polish history”.   Lech Wałȩsa said: “It is a very sad news, really sad both for me personally, and also for Poland.

We worked together from the memorable August 1980 until when he became the Prime Minister. Our cooperation was ideal, and this is why we achieved such important results. Then we draw a bit away from eachother, but I have always thought he was the best Prime Minister that we could ever have, Poland could ever have, in that particular historical period. ”Polish President Bronislaw Komorowski, with whom Tadeusz Mazowiecki worked closely until the end of his life, said: “This was the passing away of a man who had the courage of wisdom in the crucial times for Poland”, while Prime Minister Donald Tusk wrote in the Book of Condolences: “To the Republic’s PM, to the true founding father, to the patron of the great and noble causes, we swear that we will carry on his work”.