Echoes of 1989 in the Arab revolts 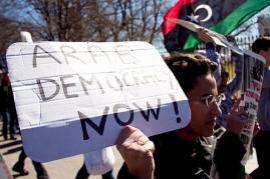 The ex leader of the Velvet Revolution in an interview to Associated Press commented upon the collapse of the Berlin Wall.

Havel said he learned during the revolts in Eastern Europe mass protests against entrenched leaders must succeed quickly or may boost into criminal violence, as it happened in Cairo when Mubarak fans cronfronted protesters.

"Time is a key factor", said Havel pointing to the danger of "regimes worse than the one of the leader who was compelled to leave".