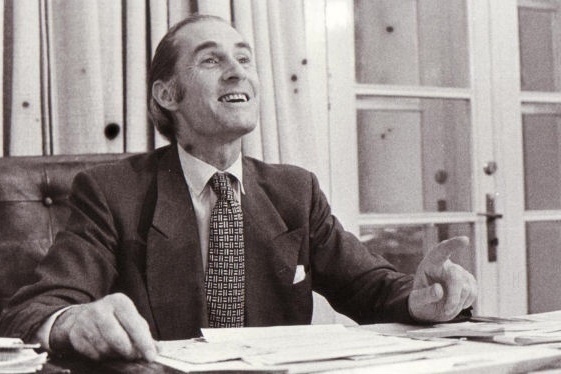 In 1974, in Chile, after the military coup d'état in September 1973, the embassies of several countries welcomed, or had welcomed, dozens of persecuted people. Within the Chilean Left, one name, in particular, gained significant respect and gratitude: Harald Edelstam, the Swedish Chief of Mission, who arrived in Santiago in 1972, whom the military regime declared "persona non grata" and expelled from Chile in 1973. Edelstam worked in defense of those persecuted by the military regime, often at personal risk, acting almost always on his own initiative, without "coverage" or instructions from the Swedish Foreign Ministry. Sometimes, Edelstam even disregarded the instructions he received from Stockholm in order to save lives.

The Chilean Right detested Edelstam. He was accused of having caused troubles to the Junta for "political gain" at home, supported by his friendship with Olov Palme, Sweden's Prime Minister. The regime's press - i.e., all the press circulating at the time - never missed an opportunity to denigrate him. Furthermore, the Chilean Right considered it unforgivable that Edelstam used international press correspondents accredited in Santiago to denounce aspects of the repression in place and the violations of human rights that the Armed Forces and the Security Services carried out. In particular, it was the DINA (Direcciòn de Inteligencia Nacional), headed by Pinochet, to carry out many of these violations.

Harald Edelstam acted in a highly complex context: opponents of the regime were arrested and imprisoned by military and police forces. Many disappeared, increasing the number of Desaparecidos. Recourses to the judiciary were ineffective. The Services relentlessly searched for suspicious citizens. At night, protected by curfew, DINA agents drove around in vehicles without license plates, free to act without witnesses.

Edelstam's first resounding gesture of condemnation of the regime fostered surprise, perplexity, and uncertainty. Edelstam managed to enter the Cuban Embassy, which the military forces of the coup d'état surrounded. Once he got in, without prior instructions from Stockholm, he declared that his country would have protected Cuban citizens, officials, and diplomatic buildings in Chile. With unprecedented firmness, Edelstam reiterated his intention when, using his own body, he opposed the entry of an army tank into the garden of the Cuban embassy in the days following the coup. The military expelled all Cuban diplomats from Chile, accusing them of having infiltrated with their agents the State's administration to accelerate the advent of the expected "revolution of the proletariat".

From the very first days of the coup, the Swedish Embassy and the larger Cuban Embassy became the "sanctuary" for the opponents, both men and women, who were wanted by the regime. It became necessary to assist them, providing them with food, lodging, medical care, and identity documents. Moreover, it was essential to obtain permission from the military authorities to travel abroad and identify third countries willing to accept them. Edelstam asked Stockholm for help, and Stockholm sent a young official from the Swedish embassy in Buenos Aires.

Edelstam quickly became an "expert" in negotiating with the military to release detainees, entrusting them to Sweden and expatriating them, using documents that were not always legitimate. He intervened to protect the Swedish and the Cubans and the citizens of other Latin American countries ruled by military regimes who had obtained political asylum in Chile. He was able to access prisons, concentration camps, and the infamous stadium in Santiago, looking for people to recover.

Estimates say that Edelstam's actions contributed to saving about 1500 refugees and fugitives in a few months. In Santiago, there were rumors that Edelstam had repeatedly acted at his own risk, demonstrating exceptional courage and a selfless audacity. At times, he clashed, even physically, with the agents of the Services, with the military, and with carabineros, always in defense of persecuted people whom he knew nothing about and whom he might never see again. Edelstam had gone so far as to hide and send abroad highly "sensitive" political figures of the Chilean Left, whose lives would otherwise have been marked.

An outstanding diplomat, Harald Edelstam carried out similar actions in Berlin (1941) and Oslo (1942). In both these cities, Edelstam and his wife Louise von Rosen had managed to establish proper relations with the Nazi authorities, making it possible for the Swede to intervene in favor of his protégés. Those prosecuted by racial laws found refuge in his house in Berlin, near the Kurfurstendamm district where many Jews lived. In Berlin, Edelstam had met Ambassador Morla, an outstanding Chilean diplomat who had given refuge and protection to about 3000 persecuted people in Madrid during the Spanish Civil War. On more than one occasion, Edelstamm said that he was greatly inspired by Morla's actions. In Nazi-occupied Norway, not only did Edelstam hide Jews and partisans in his own residence, but, on several occasions, he also safely transported them to the Swedish border in his diplomatic car. In addition, Edelstam had set up a clandestine printing press in the embassy's basement, which the resistance forced used to use. Edelstam was able to carry out his action until the Gestapo decided to stop him, "accidentally" running him over with a truck and by trying to shoot him. Edelstam had no choice but to take his wife with him and flee in a small car to the Swedish border.

During the ruthless military dictatorship in Santiago, Edelstam took "humanitarian initiatives" and generally acted without or even against his department's written or verbal instructions. He was undoubtedly aware that the top echelons of Swedish diplomacy and part of the political establishment - except for Prime Minister Olov Palme - did not agree with his actions, but he decided to act anyway. "When there's a matter of life and death, you can't negotiate; you don't have time to be a diplomat. You have to be human. You have to act according to your responsibility. If this is a new kind of diplomacy, I think we should implement it," Harald Edelstam.

The Embassy of Sweden in Rome and the Italian Embassy in Stockholm have dedicated a tree in their gardens to Harald Edelstam. The students of the "Rummo" scientific high school in Benevento and the journalist Enza Nunziato, who coordinates them in their search for the Righteous in contemporary history, reported his name to Gariwo and its president Gabriele Nissim.

This biography was taken from the memoir of Emilio Barbarani, former Italian Ambassador to Santiago de Chile in the 70s.

Harald Edelstam is honoured in the Gardens of Benevento e Duino - United World College of the Adriatic.