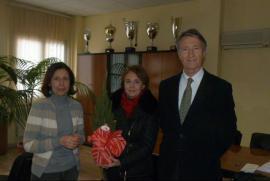 Emilio Barbarani in Benevento on past 6 March

On past 6 March, European Day of the Righteous, the city of Benevento honoured Emilio Barbarani, the ambassador who together with Tommaso de Vergottini ran the Italian embassy to Santiago del Chile in the Seventies. Students of Rummo High School dedicated a tree to Barbarani in the school’s court yard, reminding us that the then consul “organized the runaway abroad of about 750 people, including leftwing political militants, supporters of the Allende government, men, women and children who only sought to escape the climate of terror that had taken up in those days.”

On 8 October 2015, the Ministry of Foreign Affairs welcomed Gabriele Nissim and a thick group of students of the local High School who, upon the initiative by prof.

Enza Nunziato, promoted the nomination of Emilio Barbarani to the recognition as Righteous.

"The meeting – so reads a diplomatical note from the Farnesina (the name of the Italian Foreign Minister, after the villa of the Farnese noble family that hosts the offices) – was attended also by Anna Sofia de Vergottini, the widow to Tomaso de Vergottini, who ran the embassy over all those difficult years, committing himself, like other diplomats, to the rescue of numerous human lives and to offering people shelter in the diplomatic seat.

'The example of Emilio Barbarani – underlined the secretary general of the Farnesina Michele Valensise – is not isolated. Ever since the time of Guelfo Zamboni, who rescued many Jews in Salonika during WW2, there have been quite many Italian diplomats who have saved women and men from persecution and hatred. In acting following their conscience, they have shown a common cultural matrix, rooted in the values of Italian foreign policy and in our action in the defence and promotion of human rights'.

This recognition was bestowed on H.E. Mr. Barbarani on the European Day of the Righteous, which has been proclaimed by the European Parliament ‘to commemorate those who have taken on moral responsibility to oppose crimes against humanity and the different forms of totalitarianism. .' During the meeting at the Farnesina the students have expounded the motivations that led them to nominate the Italian diplomat ‘who, like others in the past, did not change History, but acted within the only span of control that he had, i.e. his own tasks, his sense of responsibility, without ever fearing for his life, nor accepting rewards'".