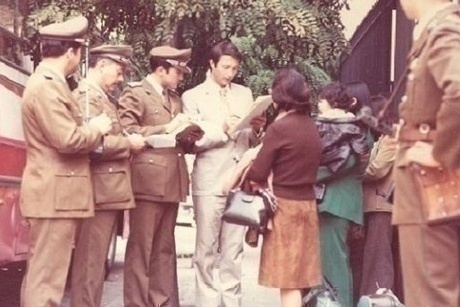 Emilio Barbarani was born in Verona in 1940. He graduated in Law and Political Sciences, and, in 1967, he started his diplomatic career. After serving in Madrid and Buenos Aires, in 1974, following the military coup d'état in Chile, he was sent to Santiago, Chile, where he saved many people's lives. Together with Tommaso de Vergottini, Emilio Barbarani led the Italian diplomatic office in Santiago del Chile in the '70s.

At the time, hundreds of thousands of people around the world were demonstrating against Pinochet's coup d'état, which had plunged Chile into the darkness of a bloody dictatorship for a year. In Santiago, the young diplomat Emilio Barbarani held the DINA, the feared secret ​police, in check, protecting and saving hundreds of political refugees.

With significant personal risk, Barbarani organized the escape of about 750 people, including left-wing political activists, supporters of the Allende government, as well as men, women, and children who simply wanted to get away from Chile's climate of terror. Barbarani took them out of the embassy in groups of 40, bringing them to the airport, where they fled to Italy. Other European ambassadors in Santiago backed his actions as potential witnesses in case of an attack.

Amid many difficulties and often putting his life at risk, Barbarani simultaneously found himself managing the difficult situation of the refugees who were stranded at the Embassy, as well as the judicial inquiry into the death of Lumi Videla. Vandela was a militant of the MIR, a left-wing revolutionary movement, and his tortured corpse was found in the Embassy's garden. Barbarani made use of all his intelligence and of a good dose of audacity and cunning to cope with all this.

In 1998, Barbarani came back to Santiago, Chile, as ambassador, ending his diplomatic career as ambassador in Lisbon. In 2019, he received the Flaiano Special Prize for Fiction for his book Chi ha ucciso Lumi Videla? (Mursia).