founder of the Mothers of Plaza de Mayo 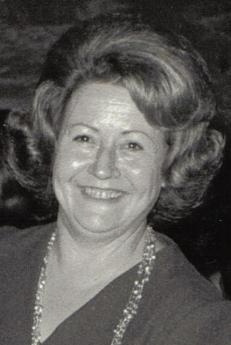 Azucena was born in Avellaneda (province of Buenos Aires) in 1924, the daughter of Emma Nitz, who was just fifteen years old, and Florentino Villaflor, a wool factory worker, who was 21. Various members of her father’s family had been activists in the Peronist movement.

At the age of sixteen, Azucena was hired as a telephone operator in a firm that produced domestic appliances. There she met Pedro De Vicenti, a trade union delegate, whom she married in 1949 and with whom she had four children.

On 30 November 1976, eight months into Argentina’s military dictatorship, one of their sons, Néstor De Vicenti, and his fiancèe Raquel Mangin, were kidnapped. From that moment on, Azucena searched ceaselessly for news of her son and future daughter-in-la, even asking for an audience with the military vicar Adolfo Tortolo, but in vain.

After six months’ fruitless inquiries, Azucena decided to join forces with the relatives of other missing people and organize a series of events that she hoped would bring the desaparecido issue into the public domain. She realized that it was only by taking collective action that they could force the government into giving an official response to their protests. She therefore launched the catch phrase: “Todas por todas y todos son nuestros hijos”(All mothers for all and they are all our children). Awareness of the risks involved did not deter her from heading the Mothers of the “disappeared” protest movement. On 30 April 1977, Azucena and thirteen other mothers arranged to meet in Plaza de Mayo, in the centre of Buenos Aires, opposite the Casa Rosada government building. Their decision to bring the protest right to the gates of power had huge symbolic and political significance.

Following a ban on people stopping or gathering in the square, but allowing them to "circulate", the women decided to walk round it. They arrived wearing white headscarves bearing the name of their missing children. The first “march” took place on a Saturday, and failed to attract much attention, but as time passed they arranged to meet every Thursday afternoon and their protests soon became a thorn in the side of the military dictators, bringing awareness of the drama of the “desaparecidos” to people all round the world.

On 10 December 1977, International Human Rights Day, the Mothers published a newspaper advertisement with the names of their missing children. That same night, Azucena was abducted from her home in Avellaneda by a group of armed men. She is reported to have been taken to the notorious ESMA torture centre, and from there on one of the “death flights” to the middle of the ocean; during these flights, victims were drugged, stripped and flung into the sea.
A few months later, her body was washed up on a beach. When democracy returned to Argentina, DNA analyses confirmed her identity.