"If I can’t leave, I will die here. There’s nothing left to do without Xiaobo" 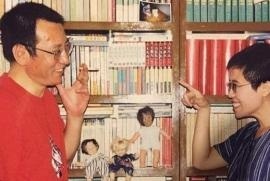 In Beijing, poet and writer Liu Xia – wife to Peace Nobel laureate Liu Xiaobo, dissident author of “Charter 08” for the Rule of Law in China, deceased after a long detention in July 2017 – is still under house arrest, held by the agents of the Chinese Ministry for State Security, guilty only of having dreamt of democracy with her husband.

Before Xiaobo’s death, Germany had already put in place a special rescue force to help him and his wife, to free them from an unjust detention. At the beginning of past April, after a series of delusionary negotiations between Berlin and Beijing, the German Ministry of the Interiors would have been organizing the secret rescue of Liu Xia at the airport and her transfer; but not even this has happened, yet. Such information comes to us from Chinese writer exiled to Germany Liao Yiwu who - thanks to his friendship with Xia - was able to talk on the phone with her in the afternoon of 30 April, encountering a situation that "struck him like an electric shock". The writer tells about a painstaking call, broken by the weepings of somebody who is living not only a privation of freedom but also a deep depression, due to the death of her husband, somebody in dire need of immediate treatment. “Now I have nothing to lose  - says Liu Xia - if I can't leave I will die at home. Xiaobo left and there is nothing left to me in this world. It is easier to me to die than to live on. Using death as a means of defiance could not be any easier to me. ”

Over the years, there have been many intellectuals who demanded the liberation of Liu Xiaobo before and then of Liu Xia. The most recent letter to Xi Jinping signed by 50 international writers dates back to 6 November 2017: Lev Grossman, Andrew Solomon, Paul Auster, Sandra Cisneros are only some of the signatories. Such calls turn out to be even more important now that the health conditions of the Chinese poet are worsening, and she might let herself die. In December, Liu Xia, in fact, did send some desperate verses to Literature Nobel Laureate Herta Mueller: “I have not got even the right to speak/ I lie like a plant/ I lie as a dead body”.

Liao Yiwu says he tried to convince his friend to issue another request for authorization to leave China, but she shut the communication, fallen prey to an uncontrolled despair. The journalist then decided to call her again and play the piano assolo Dona, Dona - a Jewish melody of WW2 which has become a representation of Jewish genocide - over her cry. Its verses are about a veal that is forcefully taken to the slaughterhouse, while a swallow flies free in the sky. The animal thinks within itself: "If I could become a swallow I could fly away, it would be great". But the veal cannot fly, as well as Jews couldn't escape their fate. And like Liu Xia, who is about surrendering to resignation. The song managed to calm down the woman, who has never hidden her vicinity to the victims of the Holocaust and even to feel a bit like one of them as if she had been a Jew in a past life.

We cannot know whether this connection exists or not, but it is certain that Liu Xiaobo and his wife have endured a persecution that deprived them of their right to a free life. Ever since Xiaobo fought for the recognition of the massacre of Tienanmen Square and was then jailed for the first time, 'til he drew inspiration from Václav Havel's Charter 77 to participate in the writing and spreading of a manifesto for democracy, the end of dictatorship and the beginning of a federation that would protect minority rights in his country, he was surveilled night and day. Until the conviction to 11 years in jail that even denied him the possibility to receive the Peace Nobel Prize in 2010 - delivered to an empty chair - and his refusal of treatment for the terminal cancer that killed him. He wanted to access some therapeutic programs abroad, not because there was some hope for him, but because that way he could have let his wife expatriate to a safe place, which she has not yet reached.