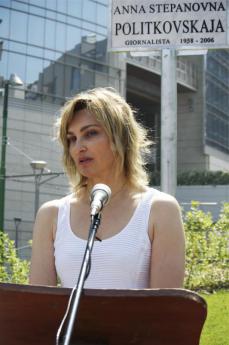 On the occasion of the inauguration in Milan of a garden honoring Anna Politkovskaja, Gariwo interviewed the sister of the Russian journalist, Elena Kudinova. In her words, the memory of Anna and of her passion for the truth. Here is what she told us.


What is the importance of dedicating a garden to the memory of Anna Politkovskaja?

The fact that Milan, for the second time, honors the figure of my sister, is really very important for me and for my family. Our desire, that we carry on also with initiatives like this, is to hold her loyalty, her memory. We wish her name will stay alive forever, and we hope people will never forget her or her work.


Which was the perception in Russia of Anna’s death and of the trial against her murderers?

In Russia the media never took care of Anna. Before her death, the national Tv did not talk about her story and her work. This lets you imagine how media described her murder, that is, like a simple  killing. They give a misrepresented information about it, a simplified version, without the real seriousness of the event. For many people in Russia today Anna is just an “old case” that has not been resolved yet. Lots of them remember only she is dead, but don’t know why. Unfortunately Anna had not - and has not even now - the attention of her country.


Are there in Russia any place dedicated to her memory?

In Russia there are no places, no official monuments dedicated to my sister. At the moment there is only a plaque in the house where she used to live, and who wants to remember her goes to the cemetery, on her grave. But there is a good news. Journalists of the Novaja Gazeta received the authorization for an important project: the creation of a monument in memory of Anna in the seat of the newspaper where she worked.


After her death, is something changed in Russia?

Maybe something, but only because 7 years passed, and time changes things relentlessly. In Russia is changed the economic situation of people, who live better than 7years ago. Regarding the information, however, I think nothing is changed since Anna’s death. The way in which they treated - and treat - her story demonstrates it, and this is very sad.


Regarding the media, what is the level of the freedom of expression in Russia?

Well, I live in UK for 14 years, so it’s hard for me saying it. However, I think that this issue is very serious now. As you can read in the foreign press, the problem of controlling media and the issue of the freedom of expression are very alarming.


According to you, what can the story of Anna teach us? What is her legacy?

Anna was a great investigator and journalist, but also a perfect mother and sister. Now, with Vera, Anna’s daughter, we are writing a book to tell her story as a woman, before than as a journalist. Anna took care of people, she sold her soul to tell their stories and to help them facing problems.
The passion for her work and for looking for the truth are the main legacy she left to the world.