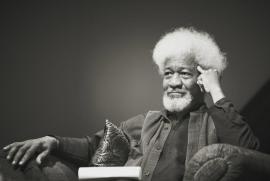 Wole Soyinka, is nigerian, of Yoruba ethnic group, but he has always been pervaded by a profound sense of belonging to the entire African continent. He is a playwright, poet, novelist and essayist and he has always struggled with courage to protect his own ideas, denouncing openly the horrors of his country, from Biafra genocide to Boko Haram’s terrorism. In 1986 he became the first African to award the Nobel Prize in Literature and in his speech, during the ceremony in Stockholm, he denounced the apartheid in South Africa and extolled the figure of Nelson Mandela, whom he would later dedicate a poetry collection. As a committed intellectual, social and political activist since 60’s Soyinka was the protagonist of struggle against abuses and violences of african dictatorships: during the nigerian civil war Soyinka was accused of conspiracy with the Biafra’s rebels because he appealed in an article for a cease-fire. That’s why he was arrested and put in a punishment cell for 22 months. In the 90’s Soyinka was longer persecuted and finally he was sentenced to death and forced into exile by the Sani Abacha’s militar dictatorship. He moved to US, but in 2016 he came back to Nigeria, dividing himself between Abeokuta, where he was born in 1934, and the capital Lagos. Soyinka is proudly Yoruba and at the same time cosmopolitan. In fact he embodies the critical conscience of his country and of the entire continent: in 2005 already, he wrote A Climate of Fear, where he denounced the perverse developments of sense of insecurity’s manipulation and he warned that “fear like power” is a danger that contaminate not only Africa, but the entire world. He also add “we must have sense of duty, towards each others, at local and international level, and we must have sense of responsibility of everybody and of everyone. From here we can build the future, we can improve the quality of people’s existence”.
He is well aware of the hard process to suggest the “South African miracle”, and he remembered Mandela again when he claims that “Search of freedom is a steady battle. We need to be alert. We live on a very thin line. Democracy, that we conquered laboriously, can always dangerously waver. We can see this in Africa and in the other parts of the world. This collective fight must be continued. For freedom”.
About the relationship between Africa and Europe, in an interview with the newspaper Avvenire of May 23, 2018 to the question: “You always support a dialogue between Africa and Europe. Why it has never been possible so far?” he answered: “Because for now, more than a dialogue we have had rather a monologue, where only Europe or western world talk. Unfortunately there was never an exchange or a mutual recognition that takes note about economic conditions deeply changed in recent times, but only an unidirectional lineup. We can see that, by looking at how Europe answers to the demands that arrive from Africa, that represent findings in all areas, from trade, to culture, to Humanitarians Affairs. Obviously even African leaders have their responsibilities. It’s a shame, because a dialogue between equals would encourage no little the develop of human relations”.