One of the recurring features of the genocidal phenomena is the attempt of the persecutors to conceal the evidence of the massacres and deny the intent of the extermination, blaming the very victims for it,  with a planned operation of mystification of the truth. In order to execute this plan, it is essential to bend the language to the persecutors’ requirements. Genocide denial should not be confused with historical revisionism, which reinterprets some events, above all of modern history, based on the fact that new sources are put at the disposal of the historians: genocide deniers in facts rewrite history with the precise goal of eliminating those crimes against humanity that reveal the murderous nature of the totalitarian and Nazi-fascist regimes.

Valentina Pisanty analyzed the reconstructions by the deniers, both as far as the selection and treatment of the primary and secondary sources, and as far as the testimonies of the survivors are concerned. Here is a summary of some of their interpretative strategies:

1. Initial drastic selection of the documentary material assessing the facts, both overlooking some essential pieces of testimony and demolishing some weaker ones;
2. Use of sources built or released by the executioners or planners of the extermination for official purposes;
3. Use of historian reconstructions (see removal from the primary sources) merely to the purpose of identifying any possible contradictions or to discover unsignificant errors which nonetheless are used and amplified;
4. use of very well-known, symbolic and popular documents such as self-biografies, with the awareness of their emotional impact (such as for example Anne Frank’s diary or the diaries of the Armenian survivors) to show them as useless to the purpose of proving the existence of the extermination;
5. Questioning of all the direct pieces of testimony, considered as “sullied” with subjectivity;
6. True construction of fake sources.

The Holocaust is placed by historian deniers among the myths artificially constructed by a world Jewish conspiracy to make the non-Jews feel guilty. There is a close relationship between Holocaust denial and anti-Semitism, an ideology that crosses the centuries and lives until today, also in Europe, besides the Arab and Muslim countries, as proven by some recurring episodes against members of the Jewish community or against the signs of Holocaust remembrance.
The Shoah is defined as a “historical hoax”, not only on the based on the anti-Semitism, from which it stems, but also to the purpose or rehabilitating Hitler’s regime, as proven by the resurfacing of neo-Nazi circles in many European countries.
We need to point out that the true goal of the systematic deportation of the Jews from Germany and occupied Europe was treated like a state secret by the Nazis, who left only very few written documents.

Holocaust denial starts from this concealment. The very victim were held uninformed about their fate and this made the extermination operations even easier. The fact that most orders leading to the massacres of 6 million Jews were given verbally makes the work of deniers much easier. 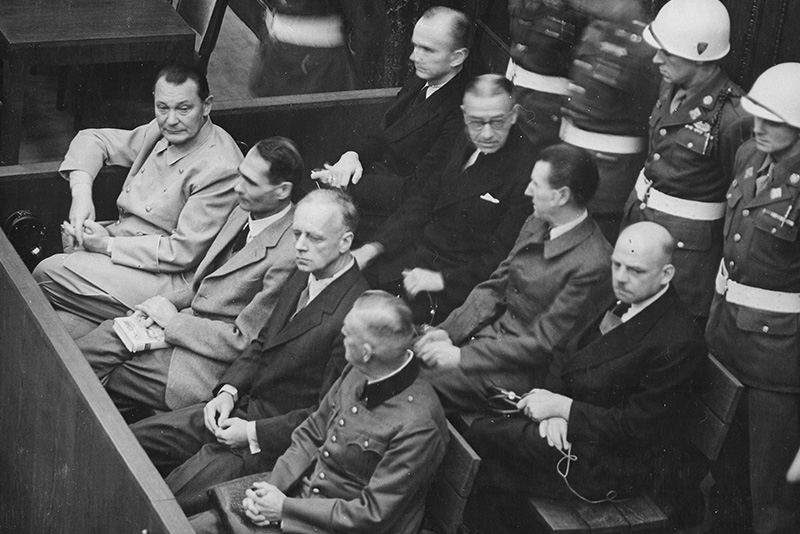 Defendants at the Nuremberg trial 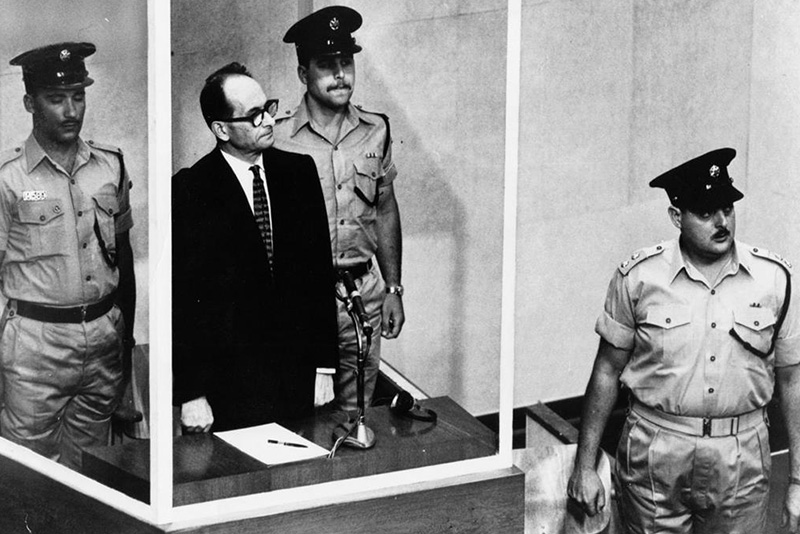 Origins and developments of Holocaust denial

Denial is articulated in many forms depending on the countries that express it. It is argued that its origins are to be retraced in Maurice Bardèche, a French intellectual and collaborationist, prominent far right exponent, who tried to clear and rehabilitate the Nazis lifting them from any responsibility.
Afterwards, Holocaust denial united extremist exponents from different walks of life: in the US, Arthur Butz in 1976 wrote The Hoax of the Twentieth Century, in which he questioned the very existence of the Shoah arguing against the Nuremberg trial; in Lyon, Robert Faurisson, a professor of French literature, operated a desecrating reading of Anne Frank’s diary, disputed the testimony of Elie Wiesel, and denied the existence of the gas chambers. In the late Seventies a mediatic debate started, leading to the first world congress on Holocaust denial, which gave rise to a sort of “international of Holocaust denial”.
Another notorious case was that of David Irving, a British essayist author of books that reveal his passage from revisionism to Holocaust denial, an outcome borne out also by the theses through which he tried to clear Hitler, deny the “final solution”, define Anne Frank’s diary as a forgery by her father. Irving also sued US historian Deborah Lipstadt over defamation, but he was sentenced to pay for the legal expenses, following the acquittal of Mrs. Lipstadt. In Italy, too some denier theses circulate, as Nazi-fascist circles resurface and given the prominence that Holocaust remembrance is taking on in the entire West. 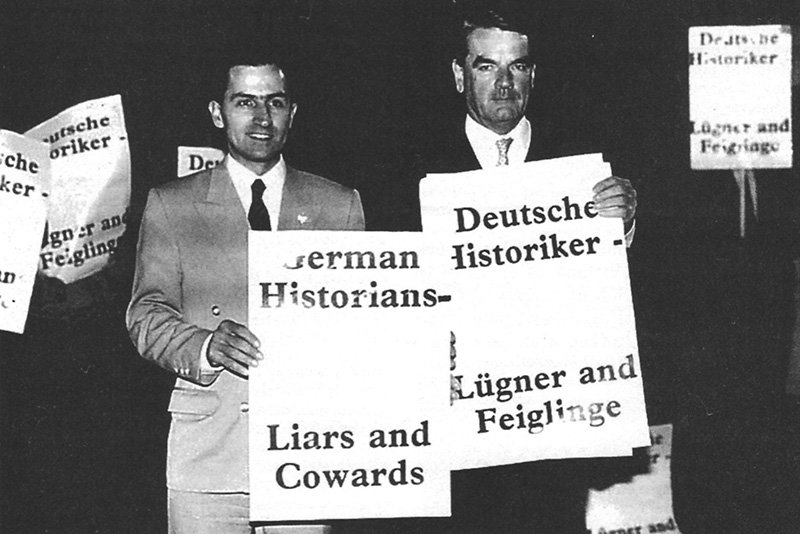 David Irving with his publisher

The denial of the Armenian genocide

The reality of the Armenian Genocide of 1915 by the government of the Young Turks has been denied since the ideation of the crime. When, on the Turkish side, the crime of genocide is denied by arguing there are no official documents proving the strategy of extermination, there is the will to avoid recognizing that Governments of States that are about planning and executing exterminations, ethnic cleansing or genocide acts, never openly communicate their intent.

Origins and development of the denial of the Armenian Genocide

“The propaganda material that circulated since the early months of World War One – (and thus even before the genocide) writes Benedetta Guerzoni – represents a first kind of publication seeking to justify the government’s action against the Armenians, through the accusations of political or military treason and atrocities towards the Muslim population. In those libels, the foundations are laid for what would be the political line of the following decades: the Armenian communities have built themselves a reputation of scarce reliability”. They deny the actual fact that a major part of the economic structure of the Empire is in the hands of Armenians, who are loyal Ottoman subjects.

Afterwards, during genocide, measures were taken that were called as “legitimate”, made necessary by exceptional circumstances (the war, the revolt, treason, the danger of a civil war). The crime is concealed by issuing “provisional” decrees of deportation and goods seizure. Then, documents assessing the legal value of deportation are stored in archives and above all the defensive argumentations for the government’s conduct are prepared, based on the thesis of an Armenian conspiracy and treason. Immediately, there starts the process of reversal of the responsibilities, that aims at blaming the victims in order to justify the crime. Rafael De Nogales, a Venezuelan mercenary of the Ottoman army, witnessed to the corpses of massacred Armenians being changed clothes and dressed with Turkish or Kurdish garments. Journalists took pictures that were sent to the Western media to alter the reality of facts.
Historian Yves Ternon affirmed that in the Turkish archives there are kept and put at the people’s disposals the “benign copies of the malignant orders”, i.e. coded dispatches that had to be destroyed after the reading, which did not always happen. 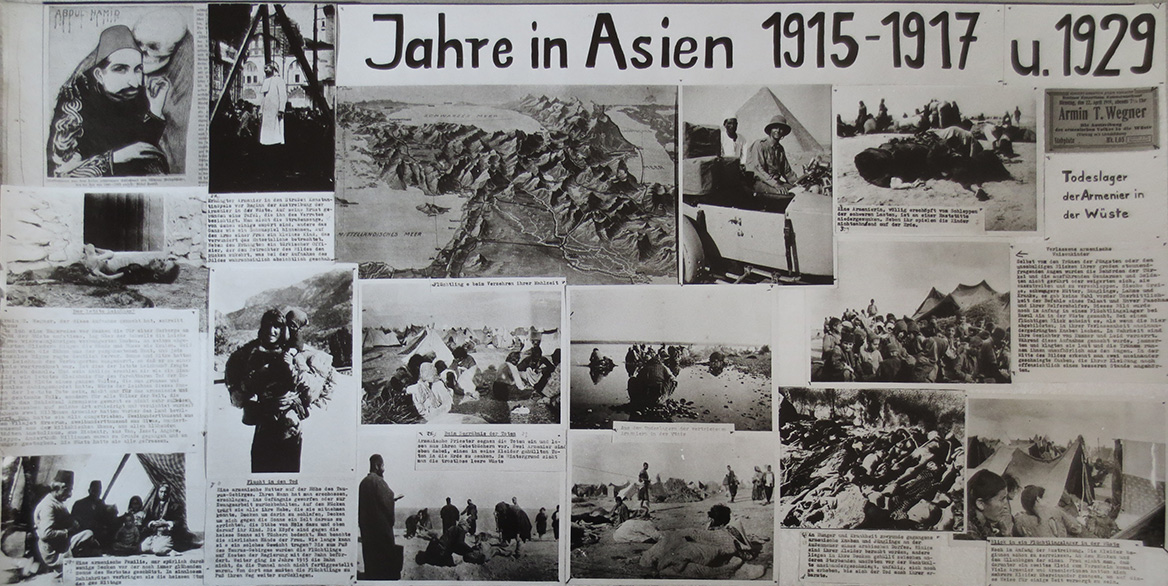 Denial after the genocide

1927: Mustafa Kemal, founder of the Turkish Republic, at the second congress of the republican people’s party, laid the foundations for the official denier historiography of the state. Embracing the nationalist ideology, Kemal spoke about immoral minorities and used only the historical events that put minorities in a negative light. The outcome, as Marcello Flores points out, is to start the process of separation and expulsion of the Armenians from the history of the Ottoman Empire and to expelled the surviving Armenians. The decrees of deportation previously issued were cancelled, but not the decree of seizure of the abandoned goods.

1930: Foundation of the Turkish Historical Society and declaration, according to which the measures taken towards the Armenians were necessary in order to build a great nation and a compact Turkish social body. The Turkish Historical Society added that the Turks had always been the original inhabitants of Anatolia and the Hittites, who were Indo-European by the way, were the ancestors of the modern Turks. This marked the birth of the rewriting of history to political purposes.
The Turkish diplomacy operated in all possible ways to make sure the massacres against the Armenians were not even mentioned and even disappeared from the nations’ memory. Taboos were created to prevent the Turkish society from remembering emotionally harming facts: there had to be a new beginning.

1945: Turkey became a UN Member, then in 1948 it signed the Convention on Genocide and as the Armenian pressure put up, a “scientifically set up” denier work started. There was the attempt to demolish the evidence and the thesis of the absence of a criminal intent by the government of the Young Turks was put forward. The government above all wanted to hide the planning and intent of the crime, sine qua non condition for the possibility to include it in the legal category of “genocide” adopted by the UN in 1948, with the consequences that we know: no statute of limitations and compensation.
In Ankara, true laboratories of disinformation were set up, organizing the Turkish version of the causes and events related to the “alleged genocide”. The documents collected by lord Bryce and Toynbee were disputed,  the Diary of American ambassador Henry Morgenthau was rejected, as were the books by Johannes Lepsius, the writings of Italian consul Giacomo Gorrini, and the reports of the missionaries.

1989: The Turkish Minister of Foreign Affairs, with an act aimed at appear as glamorous and aimed at belying the non denier historians, says he would open the archives. Then it was discovered that the available documents arrived up to 1894, and two different pathways had been created, one for the Turkish historians and one for the foreigners.
In those years, a team of Western denier historians emerged, and top research positions funded by Turkey were set up, that re-proposed the denier tese on the basis of pretentious “scientific data”: those historians include Heath Lowry, Justin Mc Carthy, Stanford Shaw and Bernard Lewis, who in 1995 was sentenced by the tribunal of Paris to a symbolic fine for denying genocide. 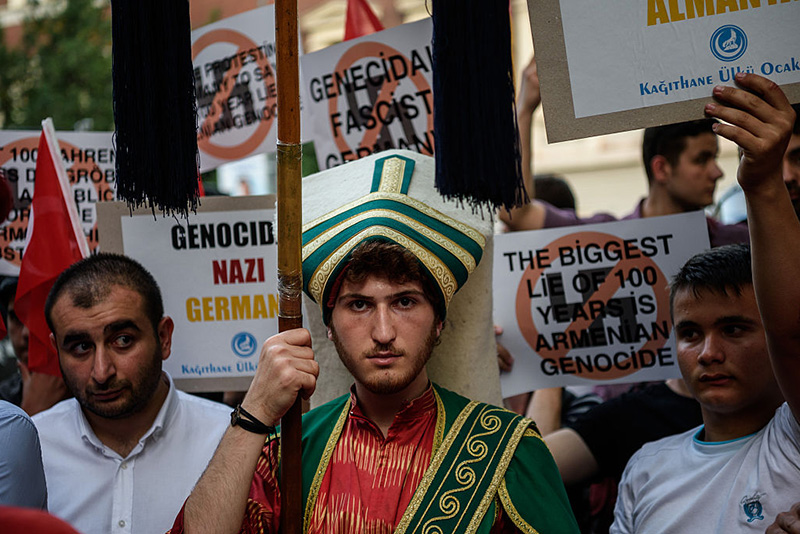 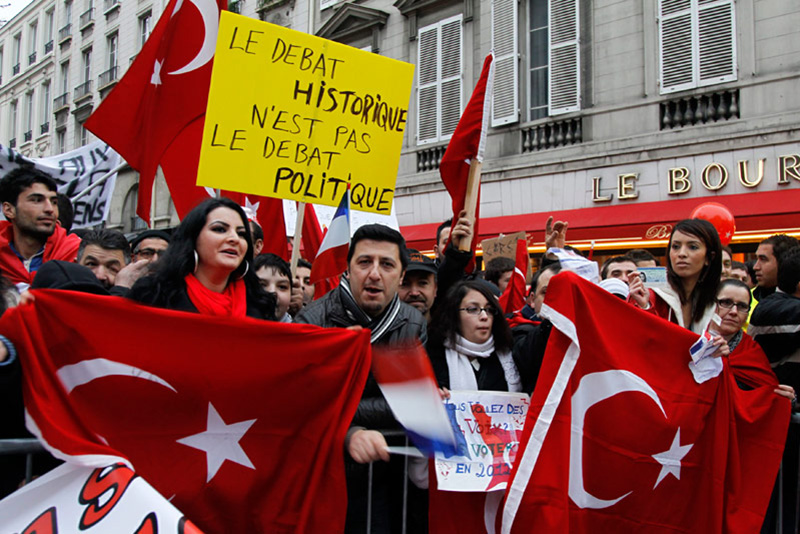 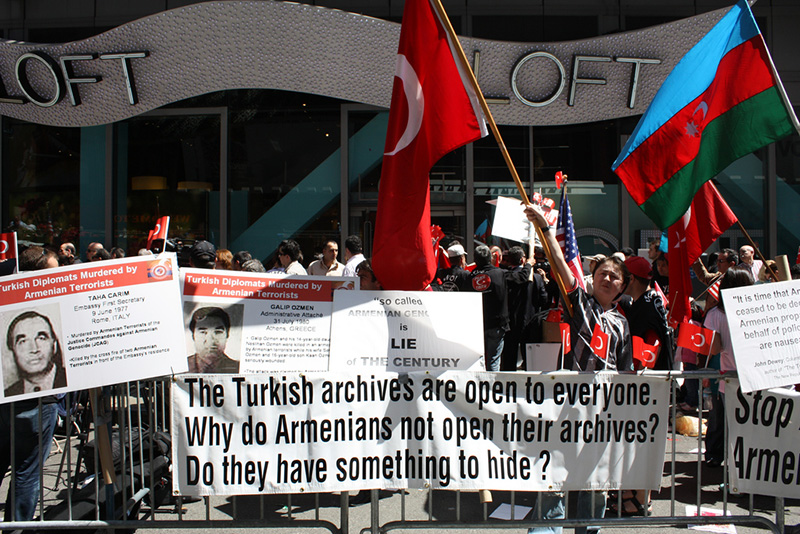 Why deny the Armenian genocide today?

In Turkey, today, article 301 of the criminal code defines as a crime the fact of talking about the Armenian genocide: doing so means attacking the power that keeps the historical truth, and thus it becomes an attack against the national identity.
Today’s Turks are not responsible for the genocide, but the denial continues because doing anything different would mean upsetting the historiographical construction that has stood since the Thirties, to make room for the historical truth, with the consequence of letting the Armenian reality, which was accurately expelled from the horizon of new Turkey, emerge. Then, the serious problem of compensation or reparations would be put before the people’s attention.

There is an “original sin” at the basis of Republican Turkey. It was established politically and economically on the basis of genocide, and the major responsible for the apparatus of the Union and Progress Committee came together in it. The fathers of the Turkish homeland would be identified with the villains. Turkey could not be condemn them, if not by repudiating itself. In this frame work, therefore, the words of Pope Francis are particularly important, who in a homily of 12 April 2015 – to mark the centennial of the Metz Yeghern – defined the extermination of the Armenians as the “first genocide of the Twentieth Century”.