The Gardens of the Righteous. A network against hatred 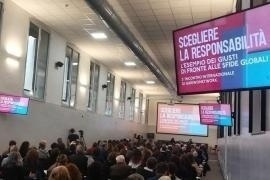 From today it is possible to subscribe to the Charters of Responsibilities for social media (The Web reality), sport (The good challenge) and the environment (The responsibility of a fragile planet) launched by Gariwo at the meeting of the international network of the Gardens of the Righteous, which yesterday gathered at the Palazzo delle Stelline, in Milan, representatives of 130 realities born in Europe, the Middle East, Africa and Asia.

"We have worked together with climate change experts, sports champions and journalists to develop these Charters of Responsibilities. And we launched them together with hundreds of teachers and representatives of the Gardens of the Righteous around the world, because choosing does not mean clicking on social, but putting our faces into life practices," said Gariwo President Gabriele Nissim, opening the debate after the greeting of the President of the City Council of Milan Lamberto Bertolé. The meeting was attended by representatives of the Gardens, teachers, associations, local administrators from Italy and abroad, and citizens engaged in spreading the message of the Righteous.

Debate on the Web

Combating hatred, in both social and sporting spheres, implies first and foremost a sense of responsibility, which starts with knowledge of the phenomenon and continues with an essential education to respect. Moreover, hatred has always existed, what has changed is the speed of propagation, as explained by the journalist and researcher for Cremit Stefano Pasta.

"The steps of the pyramid of hatred are traversed faster in the digital environment.  Decisions made intuitively in an environment marked by information overload increase, making decisions quickly and not always rationally".

Pasta, who presented to the audience some of the online hate cases collected on different social networks to elaborate his book "Racism 2.0. Socio-educational analysis of online hatred" (Morcelliana, 2018), is still confident. "Hope depends on the commitment that everyone intends to put on this issue. We need citizenship education paths that take into account the consequences, not only digital, of our actions. Looking for hate online I found many cases of communities, groups of people and individuals who do not remain indifferent. Moreover, the danger of indifference is at the heart of the history of the Shoah and specifically of Liliana Segre". To educate, therefore, but not only. "We also need to promote a digital activism that takes into account the ethics of responsibility".

The Charter of Responsibilities on social networks has also had the important signing of "Odiare ti costa", the campaign against online violence launched by philosophers Andrea Colamedici and Maura Gancitano, of the TLON project together with the lawyer Cathy La Torre, whose petition for a citizens' initiative law on the subject has obtained more than 50 thousand subscriptions. Through a video message prepared for the Gariwo Network, Gancitano hoped for collaboration between realities committed to fighting hatred, which bring together the cultural aspect of the phenomenon with its legal declinations.

From social hatred to hatred in sport, two worlds often interconnected, the step is short. "Sport teaches us that none of us is autonomous", explained Franco Arturi, historical editorialist of the Gazzetta dello Sport and director of the Candido Cannavò Foundation. "In sport even professional haters need their opponents". The Charter against hatred in sport is therefore a way to propose good practices and to rediscover the stories of athletes who have made courageous choices. Like those collected by journalists Massimiliano Castellani and Adam Smulevich in the book "A kick to racism" (Giuntina, 2019). The Charter can be the beginning of an "anti-racist movement useful to train young people to remember", explained Castellani. That warns: "To train for memory you need educators". The challenge, continued Smulevich, is that to be carriers of these demands are not only black footballers victims of racism but also those who are not directly involved but sympathize with those who suffer hatred. "For this reason, the idea of a Charter addressed to three audiences (athletes, fans, journalists, ed.) is important". In addition to Castellani, Smulevich and the marathon runner Marco Marchei (who recalled the example of Emil Zàtopek, one of the greatest Czechoslovak champions of all time who had the courage to challenge the communist regime during the Prague Spring), the Charter was signed, among others, by Pescara Calcio, by the journalists Darwin Pastorin and Leonardo Coen and by Olympic sportsmen such as Francesco Panetta, Alberto Cova, Maurizio Damilano, Luca Sacchi and Riccardo Giubilei, as well as by the actor and director Gianfelice Facchetti, son of the unforgettable captain of Inter and the National Football Team Giacinto.

Responsibilities for the planet

Finally, there is the environmental challenge, in the face of which many, starting with politicians, seem unprepared. "The image of the Montecitorio meeting room, almost empty during the examination of the declaration of our Parliament for the emergency-climate, confirms that the political world has not understood the gravity of the situation", said Emanuele Bompan, environmental journalist and geographer, author of reports in 70 countries and among researchers and experts involved in the Water Grabbing Observatory.
In the world, attacks against the "defenders of the earth", who peacefully defend the environment, are increasing. "There are many, from women in Albania who unite to prevent the construction of a dam, to indigenous activists in Brazil, to Laos and Cambodia. It is important to document stories of people like Berta Cáceres, who have been eliminated by forces that want to maintain the status quo," explained Bompan. "The work you are doing with the Charter of Responsibilities for the Environment is very important, and we must preserve the memory of those who sacrificed themselves for the environment," he said, signing the Charter proposed by Gariwo, which was also signed by Filippo Giorgi, climatologist, and Marirosa Iannelli, president of Water Grabbing Observatory.

The situation urgently requires the transition from an economy based on the contribution of fossil fuels, coal, oil and gas, to an economy where these components have a decreasing role, but we must offer compensation for those who will have to change jobs or skills, according to Bompan.

"There are many positive signs that give hope, communities that work with competence, the Paris agreement that is important, but lacks education especially in the political class. We must act soon so as not to steal the future from next generations. The future will not be like that for everyone, we have benefited many advantages. I think it is important to re-educate ourselves not only to say to politicians: "Do this and do that". If emissions haven't changed in the last five years, it's because everyone hasn't done anything".

With these Charters Gariwo proposes good rules to create positive emulation by educating to fairness and respect for the other, and to show that every human being can use his personal space of freedom to safeguard the future of the planet, following the example of the Righteous. 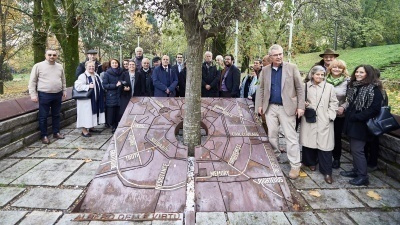 International visit to the Garden of the Righteous of Milan

on the occasion of GariwoNetwork 2019