Honouring the Righteous is very important for the humanity 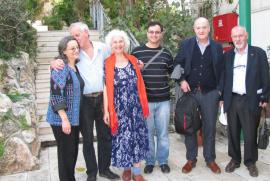 Dyana with other colleagues, Yair Auron and Gabriele Nissim and Pietro Kuciukian

Dyana Shaloufi-Rizek is the director of the Museum in Wahat al Salam ~ Neve Shalom, a village inhabited by Israelis and Palestinians willing to coexist peacefully. On 31 May she will be honouring the members of a Circassian village in the Caucasus who rescued 32 Jewish children in the Holocaust.

On May 31 you celebrate the Muslim Righteous of a village in the Caucasus, who rescued 32 Jewish children. Will you tell us this story?

In 1942 during the war, Bsaline, a Muslim Circassian village in the Caucasus decided to rescue 32 Jewish children by adopting them and registering them into the ID cards of some residents who agreed to rescue them. The most amazing thing is that no one of the villagers told the Nazi army who spent some time around and even entered the village and threatened the residents.

In fact, Prof. Yair Auron, from Neve Shalom Wahat al Salam, learnt about this story some years ago, he visited the village and made a research and his new book concerning the event just published.

On the 31 of May we will honor Circassians who saved lifes of the 32 Jewish kids. Two will come from that village in the Caucasus to tell the story as they heard it and to be witness. Only three people remained alive but they are elderly and not able to attend the event.

Some from Cfar Kama, a Circassian village in Galilee, helped Auron by telling him the story and together visited the village in Caucasus. In my culture, the Palestinian Arabs, we tell that the Circassian are very sociable and are generally peaceful. They are respectable people, civilized and it is nice to meet and work with them, and I know that Jews may tell the same.

Mr. Zoher Thawcho who rues the Circassians Museum and one of those who went with Auron to the Bsaline village, will join us on the 31 of May with some others, school kids and the folk dancing group from Cfar Kama. From our side, we invited some friends, the Wahat al Salam Neve Shalom inhabitance and School kids from our binational and bilingual school to participate and play some music.

What is the title of Auron’s new book?

The Banality of Compassion (The Story of the Circassia Muslim Village in the Caucasus Who Saved Jewish Children During the Holocaust).

Resling Publishing House, by now it is only in Hebrew but will be published in English soon.

You wrote that on the 1 of January you had a meeting to place some sculptures in the Garden of the Righteous. Are they to honour specific Righteous? How can art help foster peace?

We held a meeting attended by residents and leaders of our village, historians and Artists in order to expand the idea.

However, like what we did before, on the 31st of May occasion there will be only the names carved on a paper but no sculptures, due to the lack of funds. It will be a canvas on which are the organizations or Honouring the Righteous that we already honoured:

Honouring Palestinians and other Arabs who saved lives of Jews

Honouring Jews who saved lives of Palestinians and other Arabs

Honouring Circassians who saved the lives of Jews

Honouring "Ga.Ri.Wo., the Gardens of the Righteous Worldwide” movement.

On Neve Shalom ~ Wahat al Salam village, we have an open space which is part of the nature by the name "Forest of Righteous". We hope that a day will come and Artists could put their works, including texts written by us or places to hear and listen to things we would like visitors getting to be familiar with.

This will be a place to tell that the choice is in our hands - during dark periods of manmade humanitarian disasters, ethnic cleansing and genocide, we may be able to view reality with our own eyes and bravely acted to save lives. We want to tell stores that educates and creates an awareness that can shape our experience.

Would you like to indicate to us a peaceful way to achieve the civil coexistence of the different people in Israel and Palestine? While you are a model, in the Israeli newspapers there are many news of proposals and counterproposals, maybe to achieve peace before the next US elections, and also particularly complicated issues such as the trial of the Israeli soldier accused of killing a Palestinian guy.

Before the elections everybody talk about solutions, but no leader including world leaders assumes the responsibility for doing something different. Here in Israel, Jews commemorate the Holocaust, and then there independence, while Palestinians, from all over the country, remember the Nakba/the disaster.

The Israeli government and people blame and treat Palestinians as they had to be responsible during the Nazi period, despite that we have no closely responsibility nor remotely.

The policy among Israeli officials gives this impression so soldiers or people would choose to kill Palestinians on the street even when they're not in a state that can kill, a self-defence, they say - is it not racism?!

Some will be filmed so the case can go to the press but usually it passes without a trace.

Palestinians have lost hope but not faith. We see a phenomenon like taking a knife and go to the streets – is that not a desperation?!

Both sides are afraid and it's about time to get a change. In our village we learn how to understand, suport and developing a new ways solving the conflicts.

How could you expand your model?

Our community would not exist unless Bruno Hussar, its founder, had a dream, went to Latroun Monestry and asked for help, and it would not have happened if the monastery had not given us a piece of land.

The Israeli government will never give a land to have a village like ours, so you will not find another unique place like ours that people live together equally and by choice.

Even though sometimes it is difficult, we have managed to found a cooperative community between Jews and Palestinians and are a sort of a symbol - We chose the responsibility to accept the differences. We chose to move on without giving up although the desperation sometimes.

How would you suggest to expand the forest of the Righteous?

At the beginning, Auron wanted to do something for the Righteous, so we started at the Museum. He met with Gabriele that is putting a lot of efforts on this field sand I found the Gariwo interesting.