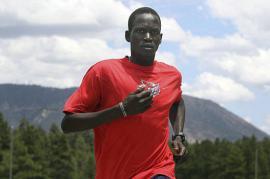 South Sudan refugee, 28-year old Guor Marial, will run at the London Games under the Olympic flag. His Country has been independent just for one year and has got no Olympic Committee, yet. The International Olympic Committee suggested him as an alternative to compete under Sudanese flag, but this option is unthinkable for the Country ruled by Omar Bashir has exterminated his family.

The marathonete escaped Sudan at age 15. He was granted the status of refugee and he was sent to New Hampshire with an uncle. There he joined an athletics club. Watching the 2004 and 2008 Games, he thought: "If I work hard enough, I can run at the Olympics".

Now his dream has come true. In Minneapolis Marial ran a 26,2 km race in just 2 hours, 14 minutes and 32 seconds and he qualified for London. Now he has been training 7 days a week, but not at all costs. If he had had to run under Sudanese flag, he wouldn't have done "in honour of the 2 million people murdered by Bashir's militaries".