The Gardens of the Righteous

Moral resistance against totalitarianism in Europe 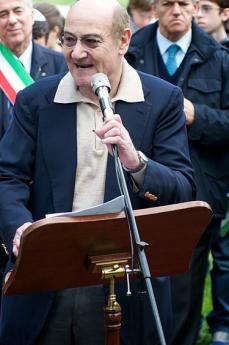 Gabriele Nissim speaking at an event.

Svetlana Broz The granddaughter to Tito’s eldest son, she brought medical aid in the Bosnian hospitals between 1992 and 1995. She collected numerous pieces of testimony on episodes of interethnic rescue and aid during war and out of this experience she took the book Good people in an evil time .

In 2006 she published the book Having What It Takes: Essays on Civil Courage. In 2000 she moved from Belgrade to Sarajevo, where she fonde a branch of the Gardens of the Righteous Committee .

Konstanty Gebert
Journalist and Polish Jewish activist, he is a prominent war reporter for several Polish dailies. In 1978 he was one of the main organizers of the so called Flying University, an underground institution of high education which taught the people about topics forbidden by the Polish Communist regime. In 1980 he joined the union Solidarność.
In 1999 he was one of the journalists accredited at the Polish Round Table.

Since 1990 he has been a member of the Christian-Jewish Council of Poland. Since 1992 he has worked for "Gazeta Wyborcza", one of the greatest and largest Polish dailies. For this paper he has covered the war in the former Yugoslavia. In 1992 and 1993 he also has worked as an adviser to Tadeusz Mazowiecki, the first Chief of the Polish government after the collapse of the Berlin Wall and a special rapporteur at the United Nations Commission for Human Rights in the former Yugoslavia. Since 1997 he also has run the Polish Jewish monthly “Midrasz”.

Marek Halter
French Jewish writer, founder of the movement “SOS-racisme” together with Bernard-Henri Lévy.
Born in Poland in 1936, at the age of 5 he escaped the Warsaw ghetto with his parents and reached Soviet Russia. He was a peasant in a kolchoz at age 8, he was trained into guerrilla at 14. He missed the departure of the Exodus and in 1950 he arrived in France, where he started painting.

He exhibits in Paris, New York and Tel Aviv and he receives international awards. The Arab-Israeli conflict upsets him: on the eve of the Six-day war he creates the International committee for negotiated peace in the Middle East knocking at the door of such Arab and Israeli leaders as Golda Meir, Ben Gurion, Hassanein Heikwa, Abu Ayad and others. His adventure in the Middle East is narrated in the book Le fou et les rois, [The Jester and the Kings], Aujourd'hui prize 1976.
Among other books he published Stories of deliverance; speaking with men and women who rescued Jews from the Holocaust,1998; , Le fou et les rois, 1988; Un homme, un cri, 1991; The Messiah, 2008; Die Geheimnisse von Jerusalem, [The secrets of Jerusalem], currently available in German only, 2002; Abraham, 2006; The Jewish Odissey: an illustrated history 2010

Pietro Kuciukian
Surgeon, son to a survivor of the Armenian genocide in 1915, he has long dealt with the history and culture of the Armenian people. He cooperates with Yerevan Genocide Museum in Armenia, where he founded the International Committee of the Righteous for the Armenians "Memory is the future ". He is one of the founders of the Gardens of the Righteous Committee, chaired by Gabriele Nissim, which is based in Milan.

Gabriele Nissim
Historian, journalist and writer, he has realized numerous documentaries on the underground opposition to the Communist regimes in the Eastern European Countries for the tv networks of the Italian-speaking part of Switzerland and Canale 5. He has worked for the magazines “Panorama”,“il Mondo”, and the dailies ”Il Giornale” and “Corriere della Sera”. With Mondadori he published, among other things, L’uomo che fermò Hitler, [The man who stopped Hitler] 1998, Il tribunale del bene, [The tribunal of Good] 2003 and Una bambina contro Stalin, [A little girl against Stalin], 2007. In 2001 he founded the Gardens of the Righteous Committee, of which he is the Chairman.

For his commitment on the Righteous subject he received numerous International recognitions among which, in 2003, the critics prize “Ilaria Alpi” for his tv documentary “Il giudice dei Giusti” [The Judge of the Righteous] and, in 2007, the special Mention of the Lombardy region for his activity for peace and about the Righteous. He suggested Milan City Administration to create the Garden of the Righteous Worldwide, which was established in 2003 with the support of the Gardens of the Righteous Committee and the Union of the Italian Jewish Communities.

Ulianova Radice
Gabriele Nissim'a aide, with him she founded the Gardens of the Righteous Worldwide Committee in 2001. She run the Gariwo site and she has conceived and realized the European Project WE FOR.