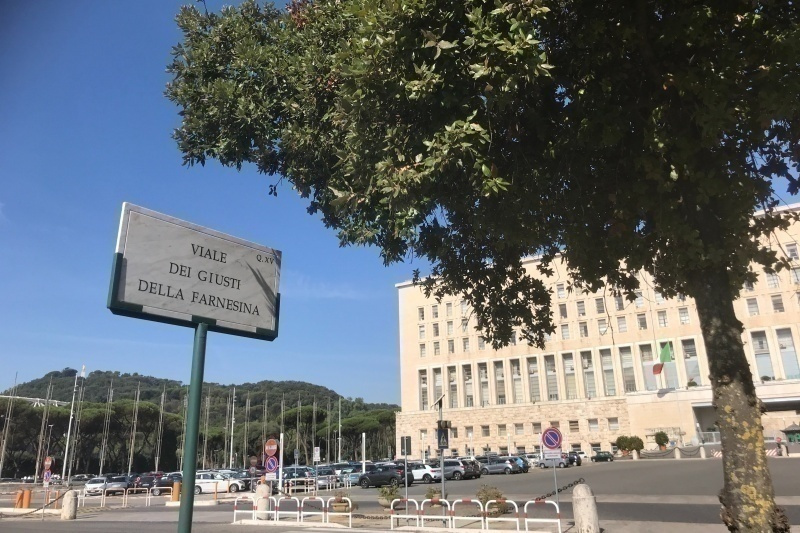 On 14 September 2021 the opening ceremony of the Viale dei Giusti della Farnesina has been held in front of the main building of the Italian Foreign Ministry. The avenue is dedicated to the Righteous diplomats that saved lives during their mandates.

By naming such an important avenue to the Righteous, the Municipality of Rome took up the proposal of Gariwo, the Foundation that for over twenty years has been involved in seeking and promoting the figures of the Righteous who save human lives or dedicate themselves to the defense of human dignity as a prevention of genocides and crimes against humanity.

In presenting the initiative, the president of Gariwo, Gabriele Nissim reiterated the importance of Italian diplomacy in saving lives, starting from his personal story: “My family was part of the Thessaloniki jewish community, a of 50,000 people. Of these, 49,000 disappeared during the Second World War. In those days, there was an Italian consul called Guelfo Zamboni who handed out passes to save the Jews. If there had been other diplomats like Zamboni, perhaps history would have gone in another direction”, said Nissim.

From the Righteous of the past comes the warning for the diplomats of the future: “The initiative at the Farnesina (as the Foreign Ministry Building is called, ndr) has an enormous moral and political value in today's world. We are creating a project that will serve for generations”.

According to the Minister Di Maio, "more and more often our diplomats and officials are engaged in very difficult situations, demonstrating a deep sense of duty and an undisputed attachment to the values of the State. From now on along this avenue we will cultivate the memory of all the Righteous among our diplomats”.

The main goal of the project is to establish a Garden of the Righteous in the Avenue. A special commission selected by the Ministry of Foreign Affairs will identify the Righteous to whom the trees in the Garden will be dedicated.

These initiatives are promoted in the spirit of law no. 212 of 20 December 2017 launched by the Italian Parliament to establish the "Day of the Righteous" on the 6 of March, each year. This commitment was made in accordance with the establishment of the "European Day in Memory of the Righteous", promoted by Gariwo and approved by the European Parliament on 10 May 2012.

Title of the "Viale dei Giusti della Farnesina" in Rome