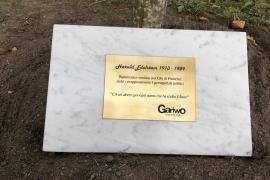 On Monday 24 September, in the seat of the Embassy of Italy to Stockholm, a tree and a plaque were placed in memory of Harald Edelstam, the Swedish diplomat who helped the politically persecuted in Pinochet’s Chile.

The ceremony was held in the presence of Italy’s Ambassador to Sweden Mario Cospito, Gariwo chairman Gabriele Nissim, Harald’s granddaughter and President of the Edelstam Foundation Caroline Edelstam (whose speech is attached), and Enza Nunziato, a journalist who has long been engaged in bringing about the example of the Righteous of our time.

Harald Edelstam, Swedish head of mission, arrived in Santiago in 1972. Declared a “persona non grata” by the military junta, he was expelled from Chile in 1973. “In Santiago there were rumours that Edelstam had often acted to his own risk, showing an exceptional courage, an extraordinary bravery, a total selflessness, always to the defence of persecuted people whom he did not know and maybe he would never see again”. By these words, Emilio Barbarani, former Ambassador to Santiago of Chile in 1974, remembered the Swedish diplomat in an article for Gariwo.net .
It is estimated that about 1,500 people came into safety thanks to Edelstam’s action.

Edelstam’s humanitarian commitment had started 30 years earlier, during the missions to Berlin (1941) and Oslo (1942). In the German capital, in agreement with his wife Louise von Rosen, Edelstam hid numerous Jews in his home, while the following year, in Norway, he gave shelter to Jews and partisans and helped them escape.

For his action in the defence of human rights, Edelstam is already remembered in Rome in the premises of the Embassy of Sweden, and since 2016 with a tree in the Garden of the Righteous of Benevento, upon the initiative of the students of Liceo Scientifico “G. Rummo”.

The ceremony is part of the project Diplomacy of Good, launched by Gariwo in order to rediscover and popularize the tales of the diplomats who have acted worldwide in the defence of human rights. Our aim is that of working with the Embassies “to sow and pass on the culture of Good, strengthen the image of Italy abroad and stimulate the host countries to follow this pathway,” said Gabriele Nissim.

“After those in Tunis in 2016 and Amman in 2017, this initiative is the outcome of the cooperation between our countries and marks an important step forward of Diplomacy of Good. My dream is to see soon realized in Stockholm a Garden with trees in honour of two extraordinary Swedes: Harald Edelstam and Raul Wallenberg, two Righteous of the Humanity, symbols of an open and receptive Europe”.