The Maternes honoured as Righteous

they sheltered the son of an unknown Jewish woman 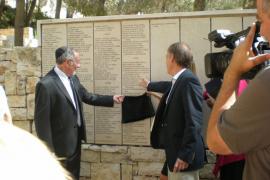 Louise and Joseph Materne have received the posthumous title of “Righteous among the Nations". They sheltered the little son of an unknown Jewish woman, Mrs. Chaya Sarah, when the German troops were invading Belgium and deportations were started.

The childless couple belonged to the Resistance and already hosted the son of a couple of Spanish antifascists, Juan. However sheltering a Jews could caused them to be put to death.
The little child, Zalman Shiffer (then called Zenon Fejertag) lived with them until the end of the war. Zalman and Juanito grew up like brothers.

In the aftermath of the conflict the little child was reclaimed by his mother, who kept in touch with the Maternes until 1949, when mother and son moved to Israel. Zalman Shiffer has dwelved into a thorough research of his rescuers and thanks to the Raoul Wallenberg Foundation eventually succeeded in localizing Daniel and Patricia Materne, the children to Juanito.