New Righteous will be honoured in Warsaw’s Garden 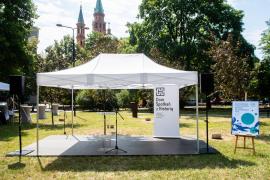 a ceremony at the Warsaw Garden

Warsaw’s Garden of the Righteous will dedicate this year’s new trees and memorial stones to three exemplary individuals. The Garden – erected in the district of Wola to honour those who had the courage to stand up against totalitarianism and defend human dignity during genocides - was born in 2014 thanks to the collaboration between Gariwo and Warsaw’s History Meeting House.

It was a committee from Warsaw’s History Meeting House to nominate the new Righteous people who will be honoured in the Garden. Here are their names: