the annual ceremony at the Garden 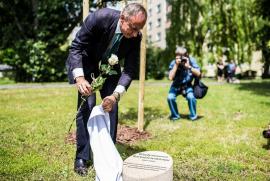 In March this year we learnt the names of people awarded the title of the Righteous. On Thursday, June 27, at noon, they will be honored with a tree and a stone in the Garden of the Righteous in Warsaw.

This year’s Righteous include Arseny Borisovich Roginsky – a Russian historian and political activist, who investigated Stalinist crimes, Ewelina Lipko-Lipczyńska – a Polish teacher, who saved Jews during WWII, and in 1968 openly opposed the antisemitic campaign started by the communist government of Poland, and Raoul Wallenberg – a Swedish diplomat, who during the war saved tens of thousands of Hungarian Jews from extermination. The names of those awarded the title of the Righteous were announced on 5 March by Zbigniew Gluza – president of the Committee for the Garden of the Righteous in Warsaw – during the gala at POLIN Museum of the History of Polish Jews.

The commemoration ceremony will be hosted by Jerzy Kisielewski, and attended by: the Swedish Ambassador, His Excellency Stefan Gullgren, who will unveil the commemorative stone dedicated to Raoul Wallenberg; Anna Rycombel, niece of Ewelina Lipko-Lipczyńska, and Jelena Żemkowa, president of the “Memorial” Association, who will talk about the activity of Arseny Borisovich Roginsky.

Arseny Borisovich Roginsky (1946–2017) – a Russian historian, political activist and president of the “Memorial” Association, which investigated Stalinist crimes. In 2012 he became a member of the International Auschwitz Council. His research work focused on the 20th-century history of Russia, with the emphasis on the 1920s, including the destruction of the Socialist Revolutionary Party and other political repressions. In the USSR he was detained for his activity. Without the help of Roginsky and his collaborators, documenting the USSR government’s persecutions of the Polish people would not be possible.

Ewelina Lipko-Lipczyńska (1913–2001) – a Polish language teacher from Ostrowiec Świętokrzyski. During the war, together with her father Jan Szymański (a teacher in the local high school and a Polish Socialist Party activist) and her sisters, she saved forty Jews, for which in 1966 she received the Righteous Among the Nations medal awarded from Yad Vashem, and in 1997 – the honorary citizenship of Israel. In 1968 she openly protested against detention of students (including her former), and against the antisemitic campaign, depriving Jews of nationality and forced emigration from Poland, for which she was thrown out of school and banned from teaching in Poland.

Raoul Wallenberg (1912–1947) – a Swedish diplomate, who worked as the Secretary of the Swedish Embassy in Budapest since 1944. He risked his life to safe Hungarian Jews from deportation to Auschwitz. Taking advantage of his position, he issued nearly ten thousand Swedish passports and turned a blind eye to the underground Jewish organisation drawing up false travel documents. He also employed over 400 people at the Embassy, obtained thousands of baptism certificates and organised humanitarian aid. Later, Raoul Wallenberg became a victim of the Soviet communism: on 17 January 1945 he was taken captive by the Soviets and wrongly accused of being an American spy and Gestapo collaborator.