New Righteous at the Garden of Warsaw 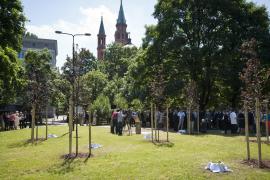 The Garden of the Righteous of Warsaw was set up in 2014 in the district of Wola, in honour of those who had the courage to defend human dignity in the face of genocide and totalitarianism, thanks to the joint efforts of Gariwo and the History Meeting House of Warsaw.

This year, too, the Garden will dedicate new trees and stones to three Righteous, in the official ceremony that will take place on 18 June at noon.

The names of these exemplary figures were announced on past 4 March by the president of the Garden of Warsaw Zbigniew Gluza, to mark European Day of the Righteous. They are:

Raphael Lemkin, the great jurist who formulated the definition of genocide and imposed it to the world. Polish lawyer of Jewish descent, he coined the term “genocide” that was included in the same-name Convention of 1948, approved by the United Nations thanks to his relentless effort.

Armin Wegner, witness to the Armenian genocide earlier and later the Holocaust, who called the leaders of his time to denounce and end mass murder, as witnessed by his letters to Wilson in 1819 to demand a homeland for the Armenians, and to Hitler in April 133 to advocate the end of the regime’s anti-Jewish conduct.

Adalbert Wojciech Zink, a Catholic priest of German descent, general vicar of the Polish Primate and sole member of the Church hierarchy to refuse the September 1953 declaration approving the arrest of Primate Stefan Wyszyński.