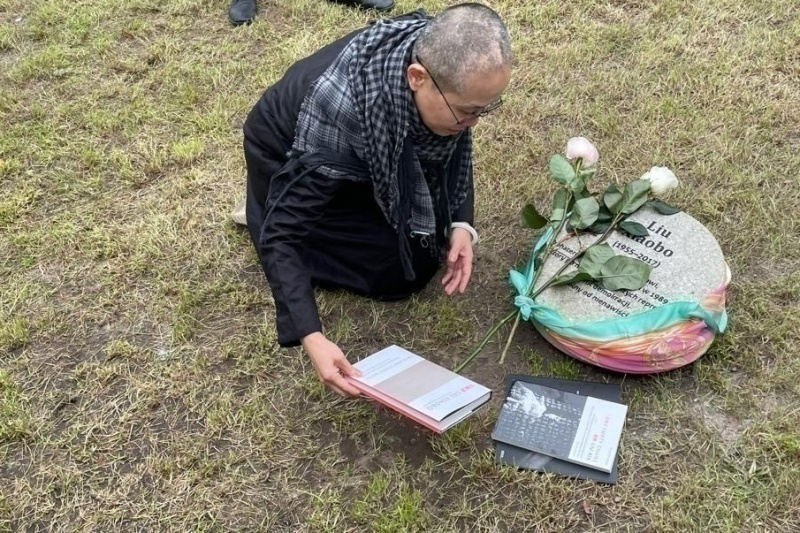 On Thursday, 23 September, the Warsaw district of Wola once again witnessed a ceremony of planting trees and unveiling memorial stones commemorating the Righteous. The Righteous are the people who in the face of difficulty and injustice chose to do good. The ceremony commemorating their deeds and life stories filled us with hope that also today, we can live and act without forgetting about other people.

In March this year, the Committee of the Garden of the Righteous Worldwide announced the names of people awarded the title of the Righteous. The Righteous are the people who defended human dignity in the times of wars and atrocities of 20th and 21st centuries.

On 23 September we gathered in the Warsaw Garden of the Righteous to honour those who received this title in 2021: Hrant Dink, Julia Ilisińska, Emanuel Ringelblum and Liu Xiaobo, as well as those who were given the title in 2020: Karol Modzelewski, Stanislav Yevgrafovich Petrov and Antonina Wyrzykowska, as the ceremony in their honour did not take place last year due to the pandemic.

“At times our own light goes out and is rekindled by a spark from another person. Each of us has cause to think with deep gratitude of those who have lighted the flame within us”. The deputy mayor of Warsaw, Aldona Machnowska-Góra, used this quote from Albert Schweitzer in her opening speech to define the purpose of the Garden of the Righteous; a place that plays a key role in fostering common European values. The next speaker, Zbigniew Gluza, President of the Committee for the Garden of the Righteous of Warsaw, said that all 28 Righteous commemorated in the Garden of Warsaw carried “an important moral message to the world”. Przemysław Gdański, the CEO of BNP Paribas, the strategic partner of the Garden of the Righteous of Warsaw, also focused on the inspirational role of the Garden. He emphasised that, unlike the Righteous, in everyday life we are not forced to display courage, but we should not forget about courage in our everyday life “when taking decisions that help protect the values that matter to us (…), when taking decisions that will help us save our world for future generations…”.

Every speech about each of the seven Righteous that followed exemplified another aspect of doing good and displaying courage. Courage taking diverse forms and showing up in various circumstances, but always present.

“A man of integrity and courage,” said Adam Michnik about Karol Modzelewski, a social activist and one of the leaders of democratic opposition in the People’s Republic of Poland. “He displayed courage not only against the government, but also against cowardice and jealousy unworthy of an individual”.

It took courage on the part of the lieutenant colonel of the Soviet Army, Stanislav Yevgrafovich Petrov, to decide not to follow orders. His disobedience saved the world from a nuclear conflict. His story, as Ewa Juńczyk-Ziomecka pointed out, “proves that an individual may impact lives of entire nations, and even the fate of the world”.

In his moving speech, Konstanty Gebert emphasised the courage of Antonina Wyrzykowska who was saving Jews in Jedwabne, and by doing so she opposed the protests and persecution organised by her Polish neighbours:

“I deeply believe that today in Usnarz Górny some ‘Ms Wyrzykowska’ is also saving lives and that we will never find out about her. She is saving them, contrary to what the authorities say and to what people in uniforms do (...), contrary to what the neighbours think, who mostly agree with the authorities that “we don’t need strangers here”. I am deeply convinced that somewhere in secret some ‘Ms Wyrzykowska’ (...) leads them along side roads to a place where they will be allowed to live in peace. I believe this because if ‘Ms Wyrzykowska’ is not there, the world does not deserve to be lived in”.

Alicja Bartuś also praised courage of ordinary people, who chose to help other equally ordinary yet persecuted people, by introducing Julia Ilisińska, who, risking her life, helped prisoners of KL Auschwitz by providing them with medicines and information. “By honouring this extraordinary woman, wife and mother with a place in the Garden of the Righteous, we commemorate those inhabitants of Oświęcim and its vicinity who did not close their eyes to the dramatic events taking place behind the barbed wire of the KL Auschwitz concentration camp”.

Courage was the foundation of the unwavering integrity of Hrant Dink, a Turkish Armenian and an advocate of dialogue between Turks and Armenians, murdered by a Turkish nationalist. Courage and faith shared by Konstanty Gebert, who recalled him, saying that: “There are people who feel like Hrant. They feel more than just members of a Nation – because this is limiting. They feel like members of civilisation – because this ennobles. And only sometimes do they feel ashamed of their Interior Ministers – if they notice them”.

Jacek Leociak mentioned another courageous attitude, which remained underestimated and unnoticed for so long. He presented the biography of Emanuel Ringelblum, the initiator of the Oneg Shabbat group and the creator of the underground archive of the Warsaw Ghetto: “I wonder why we waited so long to commemorate the place where the Ringelblum archive had been hidden. This has only happened now! For isn’t it that we find it difficult to identify with such positivist work? Nobody is shooting, right? Nobody is killing anyone. Only during all these days, every day he is risking his life, to collect these papers. In order to gather testimonies, to secure them, to collect the accounts of displaced persons who come to the ghetto, to conduct scientific research”.

Another undeniable testimony of courage was the life of Liu Xiaobo, a writer, human rights activist in China, Nobel laureate, hero of the events at Tiananmen Square, who, despite continued and continuous repressions, defended democracy. In a touching speech, his widow Liu Xia, recalled his letter inspired by Dietrich Bonhoeffer whose books Xiaobo read in prison, and his steadfast, faithful attitude. In the Garden of the Righteous, Liu Xia was able to lay flowers and souvenirs at a monument commemorating her late husband for the first time ever. In China, the writer does not have a tombstone, and Liu Xia, who now lives in Germany, was unable to attend last year’s commemoration ceremony at the Garden of the Righteous in Milan (where Liu Xiaobo was also honoured).

During the ceremony, the outstanding pianist and composer Marcin Masecki performed improvisations inspired by the lives of the Righteous. As he says himself, this was not an easy thing to do. “It is hard to talk about values with instrumental music because in music aesthetics plays the main role. It can be beautiful or horrible. But can it be good or evil? Righteous or unjustifiable? These are questions that remain without an answer. While playing, however, I felt that I was commenting on certain attitudes in life that were and are extremely beautiful. That’s why I decided to play as beautifully as possible – I wanted to distil the purest beauty itself. For me, this was the best way to pay tribute to those lives that have united us today and that continue to inspire us”.