​The symbol of France's openness to the world

the 18-November remarks by Olivier Brochet 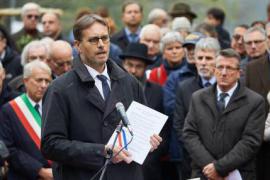 Following we publish the speech delivered by France’s Consul General to Milan Olivier Brochet at the special ceremony of dedication of a tree to Khaled-al-Asaad at the Garden of the Righteous.

thank you for giving me the opportunità to say a few worlds on the occasion of this ceremony.

As I was invited to participate in this tribute to Khaled al-Asaad, I of course immediately confirmed my support: to honour the memory of a man who dedicated his life to historical and archaeological research and the protection of an extraordinary heritage of the humanity, Palmyra; to pay tribute to one of the many victims of Daesh, an educated man, victim of the fanatic savagery and obscurantism; and to express, more in general, our solidarity to the Syrian people.

Being here this morning, I shall not forget the chief reason for my presence. But unfortunately, in the meanwhile, Paris has once again been the target of a dreadful terror attack. And we know the murderers of Khaled al-Asaad are the same as those who hit Charlie Hebdo, the Hyper Kacher shop, the Bataclan theatre, the restaurants of the eleventh arrondissement, and the Stade de France.

Friday evening, at least 129 people were murdered and the wounded were over 350.

They represented Paris in its diversity: they were the symbols of France open to the world, as they came from 20 different countries. Among them we mourn a young Italian lady, a brilliant student at the Paris Sorbonne, Valeria Solesin.

These innocent victims were France, regardless of colour, descent, walk of life or religion. They were youths loving life and seeking to build a future of peace.

Here I have a partial list of those poor broken lives, published by the French newspapers. Reading it is a dreadful and painful experience: in these pages there are more than 100 names that evoke many fates broken by savagery. Some couples killed together or divided forever. Sisters, friends were killed together. A youths from all over the world who had dreams, life projects, who loved Paris and France. This all is summed up in some lines that are surely insufficient to describe so many loved, formidable people, full of life and hope.

Here, in front of the tree dedicated to Khaled al-Asaad, amidst this Garden of the Righteous, I bow in sadness before all the victims of terrorism, in Paris like in Palmyra, but also all over Syria, in Iraq, Afghanistan, Egypt, Tunisia, Mali, Nigeria and many other countries.

In memory of all the innocent victims, I would like to lay here the list with the names of the fallen in the Paris attacks, symbols of our humanity and resistance against obscurantism and savagery.

But before this gesture, I would like to thank you all, dear Italian friends, for your renewed and extraordinary support. Our friendhip and unity are very precious goods and we are side by side in the defence of the universal values of Freedom, Equality and Brotherhood.

We are experiencing terrible moments but I would like to conclude my speech with the strong and hopeful words by the President of the Republic François Hollande before the Congress gathered last Monday in Versailles: “Truly, our democracy has overcome far worse foes than this coward murderers. Our Republic is not within the reach of despicable assassins. Terrorists believe that the free people let themselves be struck by the horror. They are wrong, and the French republic has overcome far more difficult tests. All those who have tried to challenge it were losers before History. It will undoubtedly be the same, once again, now... »