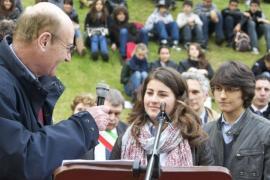 Update 20th April
Many students and citizens thronged the avenues of Monte Stella hill on the occasion of the ceremony to plant this year’s six new trees in the Garden of the Righteous.
Neda Agha Soltan, Marek Edelman, Vasily Grossman, Giacomo Gorrini, Guelfo Zamboni, Enrico Calamai are the figures chosen by the Association for the Garden of the Righteous and honoured with the dedication of a tree and a granite memorial stone.
Milan Garden of the Righteous will be soon on the Web in the site WeFor, thanks to the European project dedicated to "Europe's Righteous", with a video and the speeches delivered at the ceremonies held every year.

Mayor Letizia Moratti, the Association’s President, underlined the fact that the Garden and the memory of the Righteous provide a reason for the whole town’s pride. According to Vicepresident Gabriele Nissim: "Milan Garden is like an open book. We remember the Righteous’ moral examples [...] because we like the idea that these stories teach people, and especially the young, to think for themselves, listening to their conscience".

Along with the honoured Righteous' relatives, the speakers have been:
Letizia Moratti, Mayor of Milan
Manfredi Palmeri, President of the City Council
Leone Soued, President of the Milan Jewish Community
Gabriele Nissim, Chairman of the Gardens of the Righteous Worldwide Committee speech

THE TESTIMONY AT THE GARDEN

Antonio and Luigi Zazzeri, Guelfo Zamboni's nephews
"Guelfo Zamboni at the Garden of the Righteous"
speech in English

INSCRIPTIONS CARVED ON THE MEMORIAL STONES

TO NEDA AGHA SOLTAN
murdered on the square in Tehran
symbol of the moral resistance of the young Iranian people and of the fight for freedom
supporting documents:
• Video: Neda's fiancé speaks on oppression in Iran

TO MAREK EDELMAN
Commander of the Warsaw Ghetto Uprising
he kept the Jewish memory in Poland after the Holocaust and fought against totalitarianism and for freedom in the world
supporting documents:
• Video: Marek Edelman's obituary on France 24, in French

TO VASILY GROSSMAN
Russian writer
he recounted the Shoah and the unshakable Resistance of human beings to Soviet totalitarianism
supporting documents:
• Life and fate exhibition in Israel (pdf)

TO GIACOMO GORRINI
Italian Consul in Trabzon in 1915
a witness of the Armenian Genocide, he reported it to the international community while it was being perpetrated