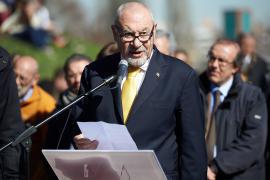 Pietro Kuciukian at Milan's ceremony for EU Day of the Righteous

Hereby we publish the remarks of Honorary Consul of Armenia and Gariwo co-founder Pietro Kuciukian, held at the Garden of the Righteous on Monte Stella Hill on 6 March 2015

I am son to an Ottoman Armenian who survived the genocide of 1915 and fled to Italy. Before dying he told me that his family had been rescued during the massacres of 1985 by a Turk.

On this third annual European Day of the Righteous, and in the centenary of the Armenian Genocide, face the flood of violence that nowadays is hitting unarmed and innocent people, the Armenian communities in the homeland and abroad relive the tragedies of the past. The horror of then is connected with the horror of today.

Honoring the figure of Mehemet Gelal Bey, the Turkish official, Mayor of Aleppo, who was demoted from all his posts for not following the orders of deporting and exterminationg the Armenians, and for saying “I am a mayor, not an executioner”, means performing a deed of justice and saving us from hatred and resentment.

Gelal Bey, besides saving many Armenians, is a figure of moral resistance who helped the reconciliation among peoples. We Armenians today, together with you, honor him as a Righteous, and Turkey should be proud of this Ottoman Righteous and other Righteous who listening to their conscience tried to interrupt the chain of evil.

The example of the Righteous, like the one set by Gelal Bey, is a call to our civil duties that are the foundations of democracy, values which then, like now, require our commitment and our responsibility. To stem the destruction instinct, to prevent other genocide crimes, to fight any kind of negationism, the Righteous are necessary. They teach us not to look away, to find our humanity again, but above all to resist evil without hatred.

So writes Gelal Bey in his memoirs: “Blood flew along the river with thousands innocent children, unapprochable elders, hopeless women, strong youths, who were swept away, towards Nothing. I rescued those I could with my bare hands, the rest were borne along by the river past the point of no return”.

He endured years in poverty, full of regret for not being able to prevent the extermination of a moltitude of innocent people. But today his memory lives again in this tree and in the stone which we dedicate to him and the whole of us who gather his testimony. Goodness has not been defeated.