Milan has own Politkovskaja garden

a victory of human rights 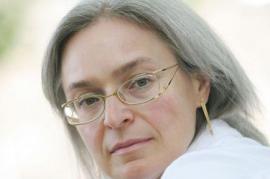 Wednesday 12 June Milan inaugurated a garden dedicated to Russian reporter Anna Politkovskaja, murdered in 2006 for witnessing to the truth about the war in Chechnya. The garden is situated downtown, in Corso Como.

Following a signature collection promoted by Association Annaviva that was joined by over 2,000 people, the City Council approved unanimously the motion to create the Politkovskaya garden as compliant with the need to "take up the need for freedom and quest for the truth that Anna Politkovskaja represents, and seize the occasion to put human rights at the centre of our lives".
The garden which has been named after Anna Politkovskaja is the green area at the crossroads between Corso Como and via don Luigi Sturzo, right in front of Garibaldi railway station.

The ceremony was introduced by councilor responsible for Culture Filippo Del Corno, who chose to remember Anna with one of her best-known quotations: "It is me who sees everything. This is my problem. I see the good and the bad things. I see the people who wish to change their lives for the better but aren't able to do  so and to retain a certain dignity they keep on lying to themselves first, focusing on positive things and pretending the negative ones don'e exist. In my own value system, this is the position of the mushroom hiding under the leaf. People will find it anyway, it is almost certain that they will pick it and eat it. This is why, since we were born humans, we should not behave like mushrooms".

The ceremony was attended also by Giuseppe Russo, the mayor of Tavazzano, a town in the province of Lodi, where he established a Garden of the Righteous on past 6 March, the European Day of the Righteous placing a plaque precisely in honour of Anna Politkovskaja. Mr. Russo remembered the importance of teaching school pupils about the fact that people die for freedom also nowadays. "Great values must be passed on to the younger people", he said.

Andrea Riscassi, RAI journalist and founder of Annaviva, underlined the importance of the choice to dedicate a garden to Anna right in the centre of Milan. "In sight of the 2015 Expo this is a very important sign. Milan has been proving its attention to civil rights and the freedom of expression".

People could hear the testimony of Vitalij Jaroshevskij, deputy-director of Novaja Gazeta, the newspaper for which Anna Politkovskaja worked: "Memory is a burden for the whole life and remembering is a very hard task. Thus I thank all those who have been struggling to remember Anna's work. By this ceremony I see one more confirmation that love and truth win over hatred".

Elena Kudimova, Anna's sister, closed the ceremony which was attended also by the journalist's son, Ilya. "I would like to thank everybody for the work that you are carrying out in the memory of my sister. I am very proud of her and the example that she gave the whole of us. Several places in the world are dedicated to her remembrance and honour.  There is a road in Tblisi, in Georgia, a square in Rome, a press centre at the European Parliament and as far as Milan is concerned, this is the second place that remembers my sister (editor's note: the first one is the tree that we planted at the Milan Garden of the Righteous on Monte Stella Hill). Today in Russia it is national holidays. My dream is that one day we'll have a road named after Anna in Moscow or another Russian town".