Khaled al-Asaad at the Garden of the Righteous of Milan

the special ceremony in honour of Palmyra's keeper 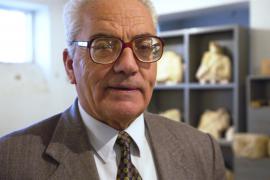 “Khaled al-Asaad is a martyr of Palmyra, and must become a symbol of the struggle against terror”. These are the words that Maamoun Abdulkarim, diector of the Department of Antiquities and Museums in Damascus, uttered a few days after the brutal assassination of Palmyra's keeper.

With the destruction of the city's ancient relics, the ISIS fanatics sought to strike a deadly blow to the values represented by those ancient remains, showing the total despair for the different cultures and human civilisations that left their millenary heritage over there.
Three months after Khaled al-Asaad's passing, Milan does not forget his example in the defence, that cost him his life, of the inestimable heritage of Palmyra.

On 18 November we therefore plan an entire day dedicated to the Syrian archaeologist, in two stages.

"slaughtered by ISIS for defending in Palmyra the archeological heritage, civil memory of the Humanity, while the world stood still"

International Conference The moral example set my Khaled al-Asaad. Save Palmira, civil heritage of the Humanity.

Greetings of the Authorities

Eva Cantarella, jurist, historian and essayist
Luciano Fontana, director of the Corriere della Sera
Maria Teresa Grassi, professor of Archaeology of Roman Provinces at the Università degli Studi di Milano, director of the archaeological mission Pal.M.a.i.s. to Palmyra (2007-2010)
Paolo Matthiae, Professor of Archaeology and History of the Arts in the Near East  at the Università “La Sapienza” of Rome and the discoverer of Ebla