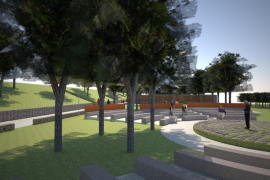 The future Auditorium of the Garden of the Righteous of Milan, rendering by arch. Stefano Valabrega

In the recent days Milan City Hall decided to assign the area of over 7,000 square meters on Monte Stella Hill hosting the "Garden of the Righteous Worldwide" to the Associazione Giardino dei Giusti di Milano (Association for Milan Garden of the Righteous) - set up on 13 November 2008 by Milan City Hall, Gariwo and the Union of the Italian Jewish Communities - that has already run the garden for several years. Thus the request put forward by the Association, which provided the free concession of the area owned by the Milan City Hall with the goal of realizing new works in sight of a redesign planned for Expo 2015, has been accepted.

“I am really pleased to get to know about this assignment of the area on Monte Stella hill for redesign of the Garden of the Righteous, whose purpose is to offer citizens and young people in particular an important moral and educational reference point - said Gariwo chairman Gabriele Nissim - I hope all technical authorizations which will make it possible to realize this project will be approved as soon as possible, so that the Garden of Milan can set an example for the entire world in the year of the Expo. Remembering the Righteous means teaching the highest value of Humanity: the refusal to kill and the prevention of genocide and violence against other people. Nurturing our planet means also promoting food for the mind, culture for the future based on the moral example of the Righteous”.

Architect Stefano Valabrega, who signed the redesign project for Gariwo, planned four areas, each serving a specific function. Besides the Garden of Dialogue and the one of Meditation there will be a Garden of Debris and an Auditorium able to host the audience of great events, in particular young people and students for 6 March, European Day of the Righteous when trees are planted in honor of the Righteous every year. The purpose is to offer the town a 24 h open and available breathing perimeter for the memory of Good.

The City Administration helps the realization of the project by providing the Associazione with stone blocks stored in the deposits of the Infrastructure Department, which will be used to create the pathways.

For the whole duration of the concession - 10 years, renewable - the charges of management and maintenance will be under the responsibility of the Associazione, which will ensure accessibility and availability of the area.

To support the initiative of the Associazione it is possible to make a donation by bank transfer, specifying the reason “fund raising for redesign of Garden of the Righteous of Milan”, to the following IBAN: 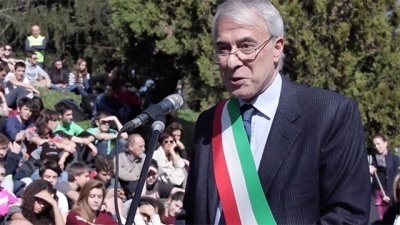 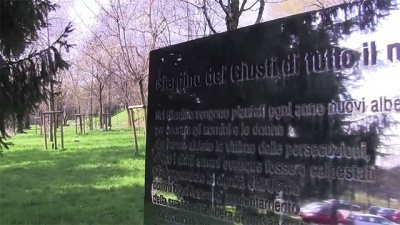