European day of the Righteous 2015

"Then and now, the always needed Righteous" 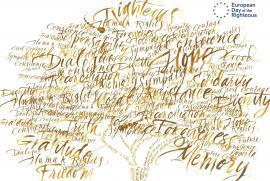 European Day of the Righteous

"Then and now, the always needed Righteous" is the theme chosen to celebrate this year's European Day of the Righteous, the second annual edition of this Day that was set up by the European Parliament upon Gariwo proposal.

Gariwo is planning many celebrations in Italy and Europe.

In Milan a two-stage event:

Admission only upon invitation

Then and now, the Always Needed Righteous

The new trees are dedicated to Razan Zaitouneh, Syrian human rights lawyer and activist, abducted by jihadist extremist groups in 2013 in the outskirts of Damascus, whose whereabouts are still unknown; Ghayath Mattar, young pacifist who offered soldiers flowers and water in sign of dialogue and struggled for human rights and freedom, who was arrested and killed in Syria in 2011; Mehmet Gelal Bey, an Ottoman Turk, Mayor of Aleppo, who opposed the guidelines of his government that imposed the elimination of the Armenian people in the genocide of 1915; the men and women of the Coastal Ward who risked their lives, each with great courage and selflessness, from Lampedusa all along the Italian shores, to rescue the castaways fleeing from hunger and violence; Alganesh Fessaha, Italian-Eritrean humanitarian activist who risked her life to rescue the persecuted in Africa and helped migrants and their relatives in Lampedusa after the tragic shipwreck of 2013; Rocco Chinnici, absolutely honest and very humane judge, as well as brave promoter of the first anti-Mafia pool of the Tribunal of Palermo, who was killed by the Mafia gangs in 1983.

For the ceremony at Monte Stella Hill booking is recommended. To perform it you can call number 02/36707648 or write to segreteria@gariwo.net

In the Insights box you find the biographies of the Righteous honored.