A day in honor of the Righteous in Milan

with the trees dedication and the relatives' testimony 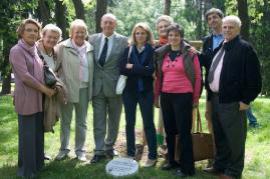 A moment of the ceremony: Pierantonio Costa with his family


The Association for the Garden of the Righteous in Milan, in the assembly of 6th February 2009 chose the first exemplary figures to be honored by the dedication of a tree. The Guarantors' Committee, gathered on 23rd February, unanimously approved of the choice.

The Association is formed by Milan's Commune, by the Gardens of the Righteous Worldwide Committee - Gariwo and by the Union of the Italian Jewish Communities.
By the Statute, the President of the Association is Milan's Mayor and Gabriele Nissim was appointed as its Vicepresident.

The Guarantors' Committee is presided over by the President of the Communal Council Mr. Manfredi Palmeri and its members are:
The Office of Presidency of the Communal Council with 4 members appointed by the President (Davide Corritore, Stefano Di Martino, Andrea Fanzago and Claudio Santarelli),
The President of the Culture Committee (MIchele Mardegan),
4 outstanding characters of the Milanese and national cultural community, chosen by the Assembly (Francesco Cataluccio, Riccardo Chiaberge, Piero Ostellino and Vittorio Parsi).

Inscriptions carved on the memorial stones